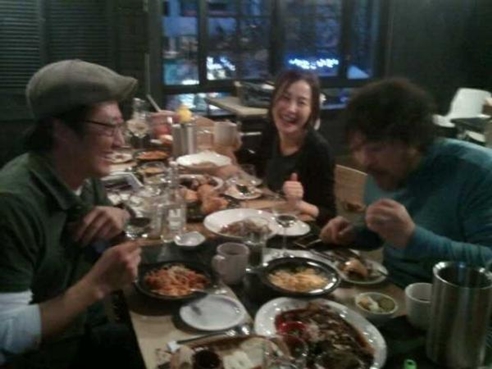 Park Shin-yang posted a picture on his Twitter on the 12th with the words, "Did we laugh too much?"

In the picture, Park Shin-yang is having a good time with Lee Won-jong and Uhm Ji-won during dinner time.

Uhm Ji-won then posted an explanation for the picture saying, "This is us after Park Shin-yang's "Actor's Concerto" practice session. Everyone was so good".

Those who have seen this say, "The guests for "Actors Concerto" are slowing being revealed", "I'll make sure to go at the end of the year", "It's good to see actors and actresses getting along together" and more.

Meanwhile, Park Shin-yang is preparing a performance called "Park Shin-yang's Actor's Concerto" that holds the story of his life, movies, dramas and love like a concert on the coming 30th and 31st of December.

"Park Shin-yang, Lee Won-jong and Uhm Ji-won"
by HanCinema is licensed under a Creative Commons Attribution-Share Alike 3.0 Unported License.
Based on a work from this source