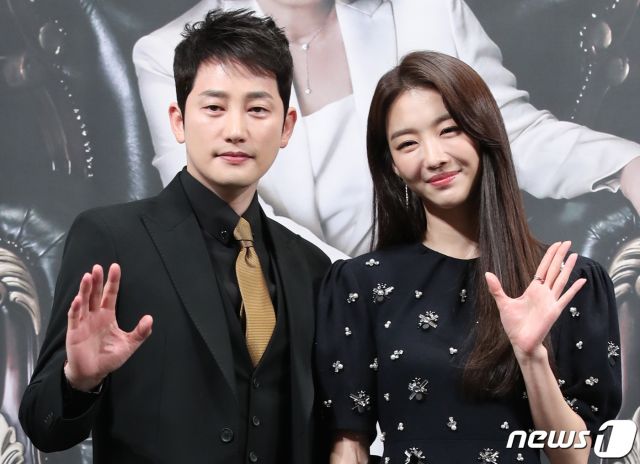 Park Si-hoo and Jang Hee-jin pose during a press event for their new TV series in Seoul on Thursday.

Park Si-hoo and Jang Hee-jin star in the new TV mystery series "Babel", which begins on TV Chosun this weekend.

The melodrama revolves around people who get caught up in their own desires with tragic results. Park plays a man who throws his life away seeking revenge and Jang an ill-fated woman who falls in love with him.

The man will sacrifice anything in order to discover the truth in two murder cases involving a succession battle, while the woman must cope with being a suspect in her husband's murder and eventually finds hope in love.

Park and Jang attended a press event for the series in Seoul on Thursday and shared their excitement in taking part in it.

"I was about to take a break. But immediately after I read the script, I changed my mind", Park said. He said it was precisely the difficulty of the part that attracted him. "The role quenched my thirst for dark, serious work, something for which I had yearned for quite some time", he said.

Playing a former star whose life has been ruined by a bad marriage, and becomes an emotional roller coaster, Jang said, "I felt like I was on two different shows, which made it all the more exciting".