Park Si-hoo returns to Korea after TV fest in Shanghai 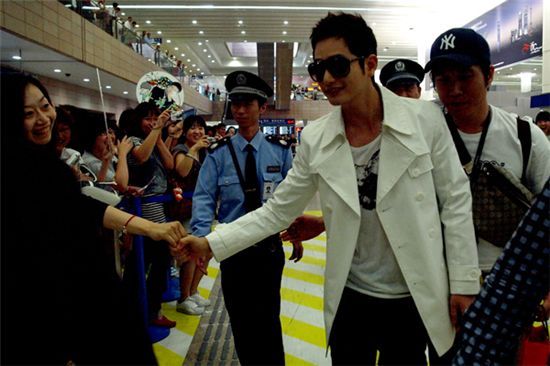 Korean actor Park Si-hoo returned to Korea on Friday after visiting China to attend a TV festival in Shanghai, according to his agency Eyagi Entertainment on Monday.

Eyagi announced in a press release that Park fulfilled his duties as the Hallyu ambassador for the Shanghai TV Festival last Tuesday, attending his inauguration ceremony later that night.

He also met with reporters for interviews but was unable to directly meet and greet his fans due to safety issues -- several hundreds of fans appeared at Shanghai Pudong Airport when the star arrived in the country, forcing the actor to remain in his hotel room.

"I was really excited to meet my fans because they have been so supportive while I was shooting the drama so I was upset to find out that I couldn't meet them in person over safety issues", the actor was quoted as saying, adding that he hopes to see them in the near future.

Park carried out a photo shoot on Wednesday and Thursday and returned to Korea the following day.

Park, whose real name is Park Pyung-ho, made his debut in 2005 through KBS2 TV series "Sassy Girl, Chun-hyang" and has since appeared in several dramas including "Iljimae", "What's Your Star ??" and most recently in SBS' "Prosecutor Princess".

He is currently preparing for his fan meetings in Japan which start June 20.