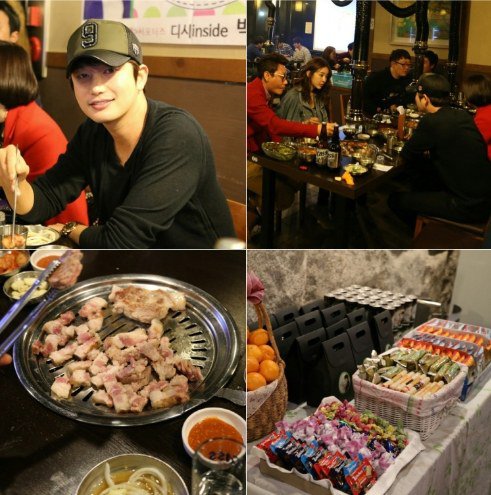 Actor Park Si-hoo's fans held a surprise event in celebration of the movie "After Love" crank up.

Park Si-hoo stars in the movie as a former pilot named Kim Seong-joon. The crank in happened in Jeju Island in November and completed all filming in China and Korea. It's currently in process of editing.

Fans of Park Si-hoo presented the actor and the crew of "After Love" 100 servings of black pork meat at a restaurant in Gangnam for their hard work for over 3 months. This was a special treat for them. The meal came along with snacks, fruit and drinks.

The "After Love" team met again since the last scene was filmed on this day. Everyone got together to talk about stories from behind the scene and made sure to read the banner the fans prepared.

Park Si-hoo returned the favor with excellent fan service. He went over to where the fans were sitting and thanked them, even taking a picture with them.

Hoo Factory stated, "We thank the fans for arranging this dinner for us. We hope you look forward to the movie that's coming out soon".

"After Love" starring Park Si-hoo and Yoon Eun-hye will be released in Korea, China and Japan. Park Si-hoo's role of Kim Seong-joon is cold and doesn't realize what his wife means to him until she's gone.

"Park Si-hoo's fans present 100 servings of pork"
by HanCinema is licensed under a Creative Commons Attribution-Share Alike 3.0 Unported License.
Based on a work from this source