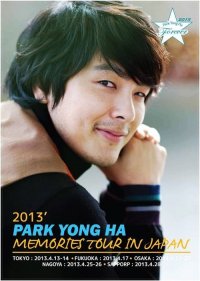 Hallyu star Park Yong-ha met with some 23,000 Japanese fans through a series of fan meetings in eight major Japanese cities, including Sendai.

Some 5,000 fans flocked to see Park, their favorite Korean actor and singer, the first day of the fan meeting held at the Marunouchi Tokyo International Forum A Hall.

During the fan meeting, Park said he plans to shoot a film sometime next year and that he will hold an Arena Tour Concert later this year on December 3.

He also performed the title song from his sixth single album "Behind Love". The song will be featured as the end title of the drama series "On Air" that will be aired in Japan through the Korean cable network MNet starting August 30.