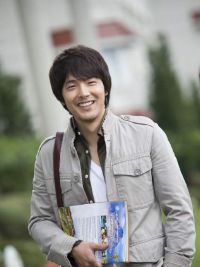 Actor Park Yong-ha was chosen to host the 44th PaekSang Arts Awards. He will host one of Korea's most prestigious arts awards Thursday evening together with SBS announcer Park Eun-kyung at the National Theater of Korea in Seoul.

Having led the Korean Wave in Japan with his role in "Winter Sonata", Park's participation in the award ceremony is expected to draw attention from his Asian fans. He said that it was an honor and pleasure for him to host the PaekSang Arts Award. He added that he is quite nervous to be hosting the show with all the big TV and film stars in the audience, but will do his best to make the ceremony memorable.

Park is currently starring in the hot SBS drama "On Air" playing the romantic, yet charismatic TV producer Lee Kyung-min. Coincidentally, Park has been nominated for the most popular TV star category together with his "On Air" co-stars Song Yoon-ah and Kim Ha-neul. The PaekSang Arts Awards will be aired live Thursday evening at six on SBS.