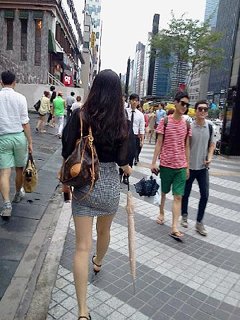 Duksung Women's University last week hired security experts to sweep its campus for hidden cameras after the high-profile arrest of a prolific Peeping Tom and his accomplice.

Security experts checked the bathrooms of 15 buildings, around 200 ventilation ducts, trash cans and even toilet bowls for hidden cameras.

Ewha Womans University also swept its campus for hidden cameras this week, though Ewha has been conducting the inspections annually since 2013.

Although the sweeps did not find any hidden cameras, students remain nervous.

According to police, the number of crimes involving hidden cameras increased from 807 in 2009 to 6,623 last year, rising more than eight-fold.

Police began a crackdown on after a woman was arrested on charges of filming naked women in showers and locker rooms at water parks and swimming pools in Seoul and Gyeonggi and Gangwon provinces.

Amid the ensuing fears, more and more women are buying devices that allegedly detect hidden cameras. Detection devices cost between W100,000 to W300,000, but experts say they are not 100-percent effective since they only trace frequencies that ordinary hidden cameras emit when transmitting the image (US$1=W1,189).

But some hidden cameras that store images on memory cards are impossible to detect. They are usually disguised as glasses, watches, umbrellas, pens, lighters and cigarette cases.

Security experts use infrared to ferret out hidden cameras in motels or public bathrooms, but the detectors cost millions of won and are useless when the cameras are operated by Peeping Toms who are walking around. Now some security companies also use devices that detect computer circuits inside the hidden cameras, but they cost more than W30 million.

Locker rooms and restrooms with round clocks on their walls should be viewed with suspicion. One security expert said, "You should take a close look at the 6, 9 and 10 positions on the clock's faces". If a motel room has more than two round clocks on its walls, experts say they may contain hidden cameras.

"Peeping Toms Spark Fear of Hidden Cameras"
by HanCinema is licensed under a Creative Commons Attribution-Share Alike 3.0 Unported License.
Based on a work from this source