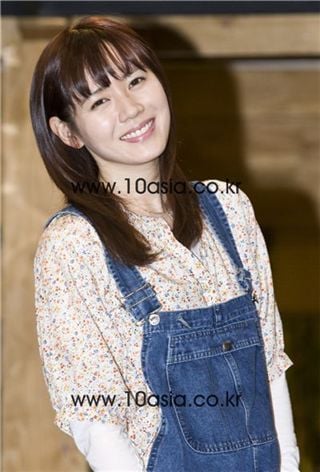 Q: Son Ye-jin, you are Lee Min-ho's senior in the acting industry. Do you act as his acting teacher too?
Son Ye-jin: He actually disregards me. He'll say, "It doesn't matter if I do it like this". (laugh)
Lee Min-ho: This is a drama where chemistry between us is very important. That's why I dare to speak my mind and it helps a lot that she really listens to my opinions. She's amazing when it comes to interpreting situations she'll also help me realize things that I hadn't thought of so that's when I think she's a great actress.
Son: Lee's greatest strength is that he is optimistic. When I worry that our ratings aren't as good as I thought they would be, he'll tell me that everything will be okay. And actors usually become very frustrated when their lines and directing don't go the way they want it to but Lee is good at letting go and organizing his thoughts in such situations. I too am the type that grumbles to myself. He is an actor with more potential for growth. I usually work with actors who are more than 10 years older than me, it's the first time I'm working with someone like Lee who is several years younger, so it feels quite weird and fun. I think there's a lot of synergy that comes from people my age.
Lee: I have a lot of fun on set. Son treats me like she's my older sister, not my senior actor, and the guys are so funny that I'm busy laughing when I'm on set.


Q: You said you have been concerned about the ratings of "Personal Taste". How well had you expected the show to do?
Son: It's not something that we can control and the more we dwell on it, the more difficult it becomes to cheer up and try harder. It's an actor's job to do his or her best, regardless of ratings, so I'm going to do my best too. I think the drama will become more humane as the plot develops to reveal the pain Gae-in and Jin-ho have.
Lee: I am a bit disappointed because I had high expectations and the ratings aren't as good. It's nobody's fault though. We've only aired four episodes so far so I think we'll do better.

Q: How do you personally think about women like Gae-in?
Lee: They're cute to a certain extent but I think I'd be very exhausted if she was like Gae-in and didn't understand what I said.
Son: Lee has been hating Gae-in the whole time he has been acting. He says, "Ugh, I really hate that!" So I told him I thank him for feeling that way. I'm glad because that's how I want my character to seem. (laugh)

Q: Gae-in, you wear a lot of unique clothes. Do you engage in the styling too?
Son: I even wear a lot of my own clothes too. (laugh) When I'm studying a character, I usually imagine what they would wear or their hairstyle, and I've been using a lot of the unique items I had been collecting. The red parka wiht flowers in the third episode was what my mom bought from Daegu. I'd thought to myself that I would never be able to wear it but who would've known I would wear it here! (laugh) I bought the scarf from Japan because it was so unique. I'm glad I can use my own items for the show.

Q: You're becoming increasingly pretty. Your hairstyle has changed too.
Son: I had looked raggedy and my hairstyle was the best (laugh) but I've become feminine. Jin-ho takes Gae-in to a party at the end of the fifth episode to show her off to Chang-ryul (played by Kim Ji-seok-I). That's when she changes and changes up her hairstyle too. And Gae-in doesn't become feminine all of a sudden but I think she is slowly discovering her identity as a woman.

Q: Did you refer to any work in particular to create your character?
Son: I don't think there has ever been such a comic book-like character in a Korean drama before. "Nodame Cantabile" did cross my mind but Gae-in has a much stronger character. Nodame is cute compared to Gae-in. (laugh) I was having so much fun during the shoot but I myself was surprised when I watched the show later on. I told myself, 'Why does my face look like that?'

Q: How do you think you would feel about having an actual gay friend?
Son: They're not my age but I have many friends like that around me. They're more sensitive so I can talk to them more easily about things I can't tell my girl or guy friends. And isn't it impossible to really become friends with guys? One of the two will end up loving the other person and that will break up the friendship but that won't happen with gay friends.

Q: What do you think you would do if people mistook you as being gay?
Lee: I think I would tell them straight up that I'm not. Unlike my character Jin-ho, I think there would be no other choice for me other than just saying that I'm not.

Q: What sort of response are you expecting for through the drama?
Son: Nothing grand. I had just thought that I would have fun with the drama. Acting-wise, of course I always want to be considered good. I hope Gae-in will develop from a character who needs protection to someone who is rooted for while showing the process of how she matures.
Lee: I had been worried because the image of my character Gu Joon-pyo from "Boys over Flowers" had embedded so deeply in people's minds. Rather than showing that I'm clearly a great actor, I think I'll have succeeded even if people say that I've matured and that they don't see Gu Joon-pyo in me anymore. I want to give off the feeling that I'm playing a realistic character who is likely to exist in everyday life rather than be greedy to change my acting.

Q: We're still in the early stages of the drama but have you thought about the ending?
Lee: Maybe an ending like in "Something Happened in Bali"? I just hope it's a happy ending.
Son: It's a refreshing story which suits liveliness of springtime. I don't think a gloomy or tragic ending would suit it, but nor would a definite happy ending. I too am curious to know what it'll be like.

""Personal Taste" will gain flavor, says Son Ye-jin - Part 2"
by HanCinema is licensed under a Creative Commons Attribution-Share Alike 3.0 Unported License.
Based on a work from this source