"Phantom Detective", S. Korean Action Crime Thriller Makes N. American Debut on May 13 in LA, and Wide on May 20 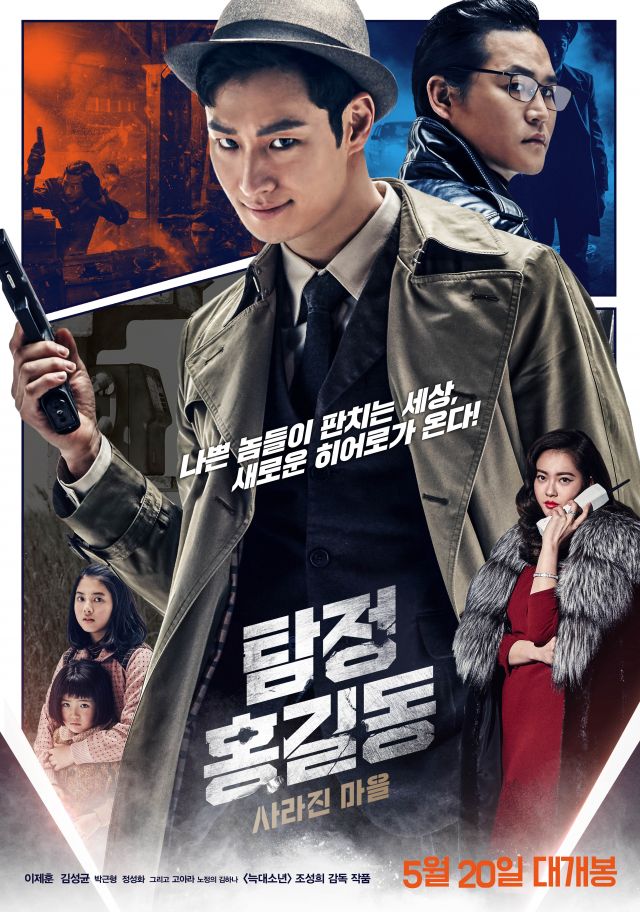 From the Director of ""A Werewolf Boy"", "End of Animal" and "Don't Step Out of the House" (Part of "Nice Shorts")

"Phantom Detective" follows Hong Gil-dong (Lee Je-hoon), a private detective with one goal in life - to find the killer who murdered his mother so that he can exact revenge on him. Gil-dong must team up with the unlikeliest of sidekicks to track down the murderer, all while uncovering secrets about a dark organization that has deep roots within South Korea.

After witnessing the murder of his mother as a child, private detective Hong Gil-dong has been on the trail of the killer for 2 decades. But when he's about to uncover the identity of the killer, the man is taken away by a shadowy organization. Little did he know that this is the same group that created both him and his nemesis…

Private detective Hong Gil-dong has one goal in life: find the killer who murdered his mother and exact revenge on him. It's been 20 years since he witnessed the murder and he finally has a name – Kim Byeong-deok. But when he tracks down Kim to a hut in the country, several men already came by earlier and took him away, leaving behind 2 young granddaughters. The girls become Hong's unlikeliest sidekicks as they once again close in on Kim and the shadowy organization that took him. In order to get his revenge, Hong must uncover the truth behind this organization that has very deep connections to every facet of the country. Little did he know that this is the same group that created both him and his nemesis…

Director Jo Sung-hee's groundbreaking short film "Don't Step Out of the House" (Part of "Nice Shorts") made a huge splash after it was invited to Cannes Film Festival. He made his feature length directorial debut with "A Werewolf Boy", which was incredibly well received and loved by Korean audiences. His ability to tell creative stories with inventive style will refresh the tale of Hong Gil-dong, a folk Korean fable, to the modern audiences. After 4 years of silence, director Jo is bringing to the screen a version of Hong Gil-dong no one has ever seen. "Among Korean folk stories, I wanted to modernize The Story of Hong Gil-dong. Also, I wanted to incorporate classic Hollywood film noir genre but also add elements of Korean culture in a fresh new way", says director Jo.

Birth of a new anti-hero!

The story of Hong Gil-dong originated in the 16th Century from the novel 'Hong Gil-dong Jeon' by author HEO Gyun. The main character robs the rich and corrupt aristocrats to provide for the poor, much like the English folk hero Robin Hood. It is believed that inspiration for this character was derived from early 16th Century Korean bandit and folk hero IM Kkeokjeong. "In the original novel, Hong Gil-dong did not conform to the corrupt Choseon society. In order to obtain justice, he utilized illegal means. I wanted to bring this character to the modern era", says director Jo, explaining why he decided to bring this fabled character to the screen. He justified characteristics of the new Hong Gil-dong as the aftermath of witnessing something so tragic as the death of a parent, thereby causing damage to his brain, rendering him emotionless and merciless. "Hong Gil-dong can't be described as 'heroic' or 'awesome'. He's not kind, or gentle, he has no creed and doesn't seek justice. He's a character without ideology. But I wanted to transform this extremely flawed character and win the audiences over", says director Jo.

With every project he has helmed, director Jo approached it with a new perspective. One cannot immediately pinpoint "Phantom Detective"'s genre and period at first glance. But Jo's unique vision and style are more than evident on the screen. "To provide audiences with something new to look at, we approached everything from a radical new way. From lighting to camera angle, blocking, production design and direction, everything had to be different. In order to bring a new story to life, I opted out of direction that is based on realism but one that is expressionistic", says director Jo.

Unlike other films that employ computer graphics for shots that are impossible to obtain in real life, director Jo chose to use CG for ordinary shots to make them feel out of this world – such as backdrop to the characters, or long shot of highway with vehicles. Although the film takes place in Korea, there is certain anonymity to the locales. This is to confuse the audience so that these locations feel real but can't quite pinpoint where, and to lead them into locations that exist only in the film. It was by design that the audience members had to use their imagination too in order to experience something new.

Everything in life is annoying to Hong Gil-dong. But when he takes on a case, his laser-like focus and deduction skills are to be marveled at. He has no recollection of his childhood due to a psychological trauma, but the only thing he does remember clearly is the face of the man who killed his mother. Now that man is within his reach. This time, it's personal.

Lee Je-hoon | Leading the next generation of greatness

After sweeping best new actor awards following the release of indie darling "Bleak Night", Lee Je-hoon is turning into a leading man. His acting chops were validated in a string of films including "The Front Line" and "Architecture 101". "Lee Je-hoon knew more about the character than I did and showed a great affection for his role. With every word, gesture and thought, he became his character", says director Jo.

The face of a mysterious syndicate | Kang Seong-il

From head to toe, Kang does not show any sign of weakness. Behind reflection of his glasses, his eyes are cold and calculated. He shows no mercy to anyone who gets in his way and he'll do anything to achieve his goal.

Although he built his career by playing ruthless villains, actor Kim Sung-kyun showed his soft and innocent side by playing a naïve college student in mega popular TV series "Answer Me 1994" and "Answer Me 1988". "Kang Seong-il is different from traditional villain characters we've seen in the past. As a character with level-headed personality and stylish dressing habits, I had to look hard into coming up with a voice that fits the character. My focal point was to present a villain that Korean audiences have not seen before", says actor Kim.

""Phantom Detective", S. Korean Action Crime Thriller Makes N. American Debut on May 13 in LA, and Wide on May 20"
by HanCinema is licensed under a Creative Commons Attribution-Share Alike 3.0 Unported License.
Based on a work from this source