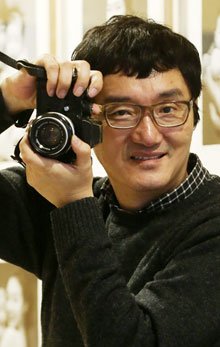 Photographer Cho Sei-hon will hold an exhibition in Seoul late this month, just ahead of Christmas. Now in its 13th year, the exhibition has become an annual event for Cho, who has devoted much of his time over the past decade to taking pictures to raise awareness of adoption.

Again this year, more than 20 celebrities, including singer Lee Moon-se and former baseball player Park Chan-ho, posed for photographs with babies who are up for adoption.

The project began when Cho took pictures of babies who were awaiting adoption in 2003, after a social worker requested him to take pictures of them celebrating their 100th-day birthdays.

It was initially a one-time thing, but later he thought the photos would help raise awareness of adoption, and the shoot led to an exhibition. So far, he has photographed 600 babies with celebrities and stars in various fields.

The photo shoots are rarely easy, as the babies have to be kept calm and comfortable while the photos are shot. For this year's shoot, Cho planned to take pictures of 15 babies, but five were unable to pose because they were unwell. "I have two daughters, so I know how to take care of babies; I changed their diapers and fed them when they were babies. But still it never runs smoothly", Cho said.

The decade-long project has had wide-ranging impacts. Actor couple Jang Dong-gun and Ko So-young, who participated in the project in 2005, donated W100 million to help adopted children and single mothers, and some participants adopted babies of their own (US$1=W1,181).

"I didn't expect I'd be able to work on this project for such a long time, but it's been 13 years already. This has been possible mainly because I've been able to see people's thinking toward adoption changing, and I've felt that I was able to be of some help in that", Cho said.

"These days more people are considering adopting children. Those who first notice the celebrities in the photos later recall the babies next to them", he added.

Cho said he also realized that the biggest change had been in himself. "The project encouraged me to find various ways to contribute to society as a photographer", he said. Among his other activities, Cho helps homeless people and poor children learn how to take pictures in order to let them find jobs as photographers.

He has also volunteered at refugee camps in Lebanon and Nepal as a photographer for the United Nations High Commissioner for Refugees.

"Photographer to Hold Adoption-Themed Exhibition Again This Year"
by HanCinema is licensed under a Creative Commons Attribution-Share Alike 3.0 Unported License.
Based on a work from this source