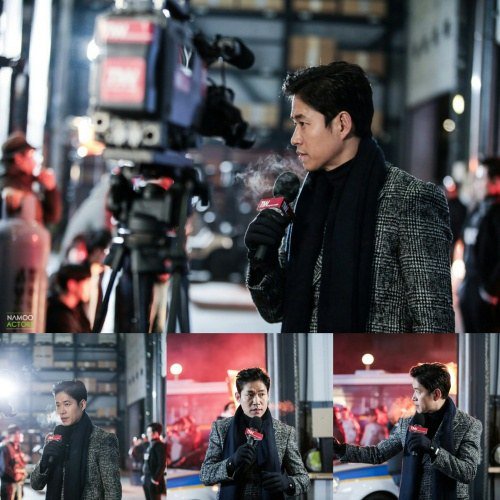 Behind-the-scene pictures of Yu Jun-sang making the poster of the new drama "Pied Piper" have come up. Yu Jun-sang has transformed into a charismatic reporter in the pictures.

The pictures look tense. The day the poster was taken was a cold one when temperatures went down drastically. However, that didn't stop Yu Jun-sang from being professional.

He takes on the role of Yoon Hee-seong in the drama "Pied Piper". He is a trusted icon but he is a twofold character who only cares about ratings and thinks the nation wants exhilarating news.

Meanwhile, "Pied Piper" is about the conflict between a crisis team who use communication to solve problems and the Pied Piper, the generation's monster. The drama is directed by Kim Hong-seon-I and written by Ryoo Yong-jae.

""Pied Piper" Yoon Joon-sang, a professional news reporter"
by HanCinema is licensed under a Creative Commons Attribution-Share Alike 3.0 Unported License.
Based on a work from this source