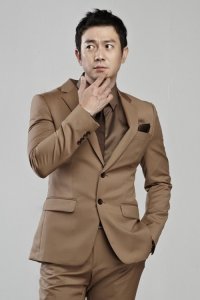 "I want to concentrate on playing Monopoly like a little child. I don't want to confine myself to one single image but want to evolve into an actor who can play a whole variety of characters". After almost two bottles of soju, Park Yong-woo, the star of the recently released thriller "The World of Silence", suddenly talks about Monopoly. His remarks may seem arrogant, but there is if anything a sense of inferiority behind them. Unlike some older actors who use their unhappy childhood experiences in their craft, he grew up in a comfortable home. His father was an engineering professor and his mother a music teacher. When he first chose acting, Park felt hampered by the fact that there simply wasn't any trauma he could capitalize on. Now 35, he has convinced himself that "objective imagination can be more important in popular art". In other words, he can act more objectively because he has no bitter experiences of his own.

Viewers rediscovered Park in his 2005 film "Blood Rain" for his ability to express warmth and coolness at the same time. But perhaps we will have to get used to seeing him as a whole range of different characters, from a wild-eyed college lecturer totally immersed in a love he has found only late in life in "My Scary Girl" to a pizza restaurant owner who has a crush on a piano teacher in "For Horowitz" ("My Piano"). And then there is the investigator who probes the disappearance of girls the old-fashioned way. He has diversified over the last two years, a rare trait when so many actors and actresses are very good at playing only one particular character.

He says he was shy and poor at speaking his mind as a child. Instead, he nurtured his imagination. He believed that acting was the only way for him to express it because it did not require him to show his "naked face". He admits he was rarely able to act as he wanted to at first, but a decade's experience enabled him to have moments when he can freely control his acting.

The road has been bumpy for him: he failed twice in the college entrance exam before he was admitted to Chung-Ang University's drama and cinema department. He failed twice to become a TV actor for MBC in 1995 and spent a decade before gaining fame as a movie star. His close friends often joke that his acting seems to reveal the grudge he has had over the years, and he smiles a bitter smile when producers who used to refuse him ask him to appear on their programs. He says he will always remember something "Blood Rain" director Kim Dae-seung told him. When everyone praised his acting in the film, the director advised him, "You may believe your face has no spots at all when you look in the bathroom mirror, but there are lots. You may start to find them and many others down the road. Don't forget it". "I want to play a variety of roles and act for long, keeping what he said in mind", Park says.