"Please Come Back, Mister" VS "Descendants of the Sun" 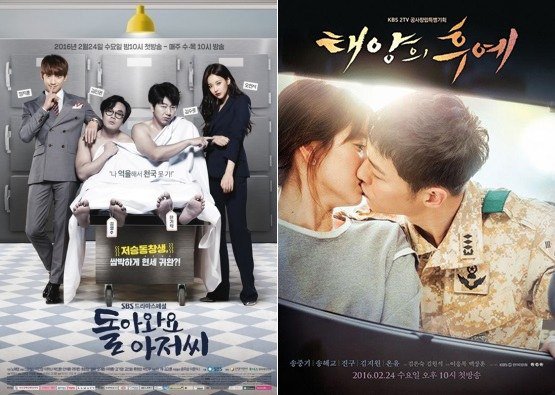 The competition on Wednesdays and Thursdays has started. The new SBS drama "Please Come Back, Mister" and the KBS 2TV drama "Descendants of the Sun" set out on a fun but intense competition.

Kim Eun-sook has had numerous hits like "Lovers in Paris", "On Air", "City Hall", "Secret Garden", "A Gentleman's Dignity" and "The Heirs". She's had her share of criticism for the repeated romance between a man and a woman but she hasn't failed yet when it comes to viewing percentage.

This time she teams up with director Lee Eung-bok to create the story of a dispatch soldier and doctor.

Song Hye-kyo and Song Joong-ki couple up in this drama. They take on the roles of a doctor and soldier who dream of love and success in a foreign land. The drama is pre-produced and is expected to bring hope to the drama recession in SBS.

To turn things around the Korean way, writer Noh Hye-yeong and director Sin Yoon-seob are pairing up. These two are responsible for several successful movies and dramas.

Not only that, "Please Come Back, Mister" stars a few of the most wanted actors and actresses such as Jeong Ji-hoon (Rain), Oh Yeon-seo, Kim Soo-ro, Kim In-kwon, Lee Min-jung and Lee Honey. Rain attempts at a comedy for the first time in a long time and Oh Yeon-seo has rapidly become popular with the previous drama "Jang Bo-ri Is Here!".

""Please Come Back, Mister" VS "Descendants of the Sun""
by HanCinema is licensed under a Creative Commons Attribution-Share Alike 3.0 Unported License.
Based on a work from this source