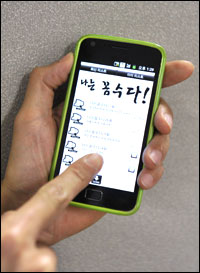 A podcast "dedicated to ridicule" President Lee Myung-bak, is emerging as a powerful alternative media outlet both politicians and mainstream media cannot ignore.

The weekly Internet radio talk show "Naneun Ggomsuda", meaning "I'm a petty trickster", is being downloaded by millions each week. It is one of the most popular podcasts on Apple's iTunes.

Lampooning Lee's governing style and raising speculations about him and his aides, the show has become almost a cult among young people who clearly expressed their frustration with the ruling Grand National Party (GNP) in the Seoul mayoral by-election last month.

Kim Ou-joon, 43, the main host of the show, better known as "Naggomsu", and founder of the Ddanzi Ilbo online newspaper, and three other co-hosts have risen to rock-star status.

The three other members are Chung Bong-ju, a former lawmaker; Choo Chin-woo, a reporter of the progressive SisaIN magazine; and Kim Yong-min, a political commentator.

In the show running for several hours, the four keep throwing sarcastic verbal jabs _ peppered with occasional swearing _ against Lee and conservative politicians.

With the podcast expanding its fan base, political bigwigs have thronged to get a chance to talk on the show.

Its effects on the young generation were proven to be powerful in the Seoul mayoral election.

There is much attention on whether it will remain as a key agenda setter until next year's general and presidential elections amid signs of law enforcement authorities growing uncomfortable with the hilarious, sarcastic comments against the Lee administration.

Park Won-soon, a former civic activist, garnered nearly three times as many votes from people in their 20s, 30s and 40s than the conservative candidate Na Kyung-won to be elected to mayor.

The show played a crucial role in Park's victory.

In the run-up to the mayoral election, the show broke the news that Na had used a luxury skin care clinic with an annual membership fee of 100 million won ($89,000). Na admitted having the membership, but said it was to treat her disabled daughter, which was seen to many as an excuse. Na has sued the program for libel.

"After the skin care allegation broke up, it seemed a lot of women in their 20s and 30s turned their back on her. Rumors against Na spread rapidly through Twitter and other social networking programs", said Hong Hyung-sik, head of the Seoul-based survey firm Hangil Research.

Choo of SisaIn also raised allegations that Cheong Wa Dae had bought an expensive piece of real estate in southern Seoul with taxpayers' money under the name of President Lee's son to set up his retirement residence. It argued the deal is part of Lee's secret transfer of wealth, calling him the "king of real estate speculation".

The presidential office denied the allegations first, but later scrapped the plan to build the retirement residence there as controversy escalated, and sacked the head of the presidential security service regarding the incident.

Following Na's defeat in the mayoral race, the conservative daily Chosun Ilbo wrote, "Na suffered a setback from the real estate controversy, and the dispute over the skin care clinic was a fatal blow to her".

The election showed how public opinions are swayed by even a podcast in the era of social media, and it has the potential to become a powerful counterforce against the juggernaut of mainstream conservative media ahead of next year's elections, analysts say.

"Naggomsu set the agenda for young voters at the past election and carried the banner of anti-conservative forces. The results were surprising", said Won Yong-jin, a journalism professor of Sogang University in Seoul.

According to another Seoul-based survey firm Realmeter, about 44 percent of the respondents said they knew what the show is about, and 15.4 percent said they had downloaded the podcast more than once. The figure means some 6 million South Koreans are listening to the show.

The show's popularity is rising even further.

Tickets for its first "offline concert", held at a theater in Seoul last week, sold out only 20 minutes after sales began. Host Kim plans to hold such offline shows nationwide to "raise public awareness of President Lee's tricks and masterminding skills".

Kim and the three other hosts plan to hold a show in the United States.

As it is a program that satirizes and mock politicians, especially Lee, it often goes too far.

During the concert, the hosts raised sensational allegations of Lee's extramarital affair with a Korean-American lawyer Erika Kim before the 2007 presidential election. One member even suggested that they had a "slit-eyed" lover child.

"The podcast blurs the lines between fiction and non-fiction. That's its biggest strength, but could create privacy disputes", said Song Kyung-jae, a sociology professor of Kyunghee University. "What's certain is that it is covering things that can't be found in established media".

"Podcast 'Naggomsu' challenges mainstream media"
by HanCinema is licensed under a Creative Commons Attribution-Share Alike 3.0 Unported License.
Based on a work from this source