"Poongsan" and "The Front Line" aim for the Academy Awards at the same time? 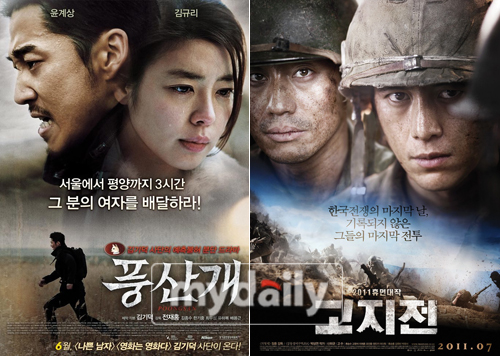 Movies, "Poongsan", "Sunny - 2010", "The Yellow Sea", "The Front Line", "Hanji" and "The Day He Arrives" all have been chosen as the Korean entries in the '2012 American Academy Foreign Language Movies Category'.

On the 11th, The Korean Films Commission clarified and revealed the list of Korean entrees that might be put up for the 84th Academy Foreign Movies category in February next year.

Director Kang Hyeong-cheol's "Sunny - 2010" which drew in 7.4 million audiences, the most of this year and is still running in cinemas, director Im Kwon-taek's "Hanji", director Na Hong-jin's "The Yellow Sea" which was also invited to the 64th Cannes International Film Festival in the most Noticeable category and director Hong Sang-soo's "The Day He Arrives" are the most likely nominees.

The judges will short list the movies and send them to Academy.

Another thing that catches the eye is the entrée of Kim Ki-duk produced "Poongsan" and Jang Hoon's "The Front Line" which almost caused an emotional battle between the two directors.

If the Films Commission decides to choose both movies, they will meet again at the Academy Awards.

""Poongsan" and "The Front Line" aim for the Academy Awards at the same time?"
by HanCinema is licensed under a Creative Commons Attribution-Share Alike 3.0 Unported License.
Based on a work from this source