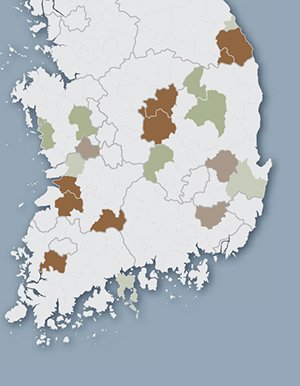 Larger Korean towns are starting to suffer from the same kind of population drain that has afflicted rural villages for some time.

The Korea Research Institute for Human Settlements in a recent report said the population of 20 out of 77 provincial cities decreased, resulting in more and more empty homes. The researchers surveyed outflow or influx of residents and focused on cities whose population dwindled by more than 25 percent over the last 40 years.

In eight of these towns the population dwindled by more than half from 40 years ago, including Taebaek, Gimje and Sangju.

The researchers said the reason is mostly that young people move to bigger cities in search of jobs, leaving only the elderly behind. That also means tax revenues are falling fast, causing 20 of the towns to rely on handouts from the central government for the bulk of their budget.

With the exception of Yeongcheon, over 10 percent of homes in these cities sit empty, compared to the national average of 6.5 percent.

Koh Jong-wan, head of the Korea Asset Management Institute, said, "Towns with a rising number of empty homes end up experiencing depressed commercial districts as well as a long-term decline in property prices, resulting in a vicious cycle of a slowdown and desolation".

"Public services need to be reorganized to match the shrinking population", said Koo Hyeong-su at the institute. "And there has to be some systematic way of dealing with empty homes and storefronts".

"Population Drain Spreads to Bigger Towns"
by HanCinema is licensed under a Creative Commons Attribution-Share Alike 3.0 Unported License.
Based on a work from this source