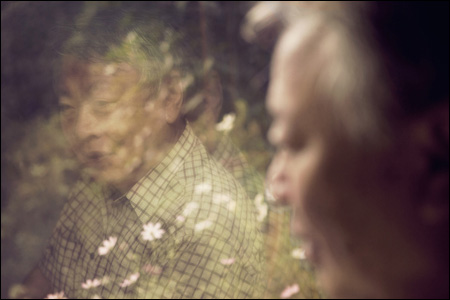 Novelist Yi Mun-yol looks out the window of his private writing quarters in Icheon, Gyeonggi Province, during an interview with The Korea Times on Sept. 17. /Photography by Jesse Chun for The KoreaTimes

This is the fifth in a series of interviews with international pioneers among Korean artists that marks the 61st anniversary of The Korea Times, which fell on Nov. 1, and is sponsored by the Korea Press Foundation. - ED.

What would have been a panicky moment for most, the novelist waltzed through with ease - though not without a bit of sweat.

The air was dank from untimely autumn showers and Yi perspired profusely as he danced back and forth between the session with The Korea Times and a meeting with fans.

Yet the inopportunity proved to be most opportune as it stripped the 63-year-old of his media-hardened facade. He was not the outspoken intellectual, but a smiling man with lots of friends that come knocking on his door at any hour of the day. Visitors passed beneath a crimson-flowered crepe myrtle - the Yi family tree - to be greeted by his wife, a spunky embroidery artist who offered home-cooked treats in spite of wearing a cast on her foot.

Though nestled deep within suburban woods here, their abode remains all the more open because it houses a literary academy. Yi launched it to provide lodging and creative direction for aspiring writers. "But in recent years established writers have mostly made use of the center. It seems society no longer needs such venues", he said, his thick Gyeongsang accent adding more texture to his husky voice.

A simple tour of his writing quarters nevertheless turned any guest into the apprentice of the hour, as it provides an intimate glimpse into the writer's whimsy and wisdom. Rooms were neatly stacked with books from floor to ceiling and the warm, musty fragrance of aged paper evoked a nostalgic pang.

Among these, piles of ancient Chinese tomes were laid out. Many of Yi's novels take readers to the past, to trail the life of a wandering 19th-century poet ("The Poet") or relive the time of chivalry ("The Tale of Three Kingdoms"). Even "The Anonymous Island", a short story that was featured in the New Yorker's September edition (the first time for a Korean work of fiction), reads like an allegorical fable despite its modern setting.

"Old texts aren't always completely original; they are an accumulation of time. 'The Analects of Confucius' for example takes ideas that have been around for centuries but he has beaded these scattered elements into a comprehensive literary necklace. This doesn't change much with time. We can refer to classics to interpret and define our own generation".

He thus urges young writers to study old texts, which he himself continues to peruse.

"In the face of eternity, 500 or 1,000 years is nothing. But compared to our 100 years, it's justly admirable for a person's name to endure so long. This is greatly moving. One African tribe measures age not in terms of biological lifespan but by how long an individual is remembered. Here, ancient authors are still alive through their writing", he said, eyes beaming like a boy sharing his most prized toy.

Books were, not surprisingly, his childhood plaything. How he fell in love with literature, however, is not quite the idyllic portrait of an artist as a young man with an innate penchant for written words.

"When I was younger I couldn't explain how I became a writer. Now that I think of it in retrospect as an old man, there were many environmental factors that left me no choice but to become one", he said with candor and sincerity while recounting a story he must have told hundreds of times.

There are artists whose lives define the way you read their work, and Yi is one of them - as his works have been translated into 15 languages in some 20 countries, even international readers unfamiliar with Korean history or culture are often enticed by his personal story that is, ironically, stranger than fiction.

The Korean War (1950-53) broke out two years after he was born in Seoul in 1948. Like many members of the intelligentsia at the time, his father abandoned his family for the Communist North. "A young 32-year-old woman was left with five young children", he said, calling the experience "a curse" - not for dramatic effect but to describe the full meaning of events now remembered in history books.

His mother managed to keep the family alive, but even after the war they had to endure the stigma of sharing blood ties with an enemy of the state. The police kept a close watch for spy activity and the Yis had to move every two to three years. "We never settled anywhere and lived in a constant state of anxiety, and I'm sure this had a complex effect on my psyche".

As a result, Yi received only about two-and-a-half years of formal education after grade school. Even though the autodidact gained admission to the prestigious Seoul National University he had to quit for financial reasons. Yet as the youngest son, Yi was not obligated to provide for the family and used his free time to read and indulged in the solitude to exercise his imagination.

He also worked on polishing his writing skills, not so much to become a novelist but because he believed it would be useful for whatever he chose to do in life. The years spent reading and linguistically experimenting "naturally came together", and he was able to compose fiction when he set his heart on it.

After giving up hopes of becoming a civil servant ("It was impossible given my family background") he taught and did news writing. At 29, he won a local award for the short story "Do You Know Narajei?" and went on to become one of Korea's most highly decorated, best-selling authors. He is also an influential commentator and supporter of the conservative right.

Asked if he would have done things differently as a younger man, he paused for a moment. "If I were not my father's son and had a more normal upbringing, I might have become a politician. Or I would have loved to (have been an academic), to choose a subject I was interested in and read about it all my life".

Walking the path of a writer did not, however, deprive him of dreaming big. "In my youth I dared dream that it was possible to merge the humanities through literature. It's a preposterous but I thought it was possible".

But such hopes are not in vain for Yi proves to be a most astute student of human psychology, history and sociology, and moreover, a master of transcending self and culture to evoke profound emotions and imagination. His 30-plus books, in the vastness of their genre, style and structure, defy categorization - the more works of his one reads the more impossible it becomes to define his oeuvre.

What is nonetheless certain is the creative spirit that pervades his writing. Yi firmly believes that the importance and role of art will endure, though it's just a matter of the form in which it is expressed. Opera has changed into pop while traditional forms of writing now appear as Web novels or even Twitter posts, he said.

He is a romantic more than anything else when it comes to the subject, and sighed at how words like "elegant", "solemn" and "honor" have become archaic both here and in the West. Though he had to head out to attend to waiting fans, he took a moment to take in the view of wildflowers, which were framed by his window like an ethereal painting.

"Isn't it beautiful? People prefer to be called 'sexy' rather than "Beautiful" these days. I'm not pining for the past; I'm just hoping for the time to come when there is a refocus on the quality of art. Today we are too dependent on our senses, on what we see, feel or hear, but more important things lie in the invisible - ideologies and beliefs that hold our world together".

The conversation, much like his stories, set aside greater meaning in the things unsaid. The answer naturally seems to navigate between the lines of his books, wherein this artist feels the most intensely alive.

"[Portrait] Yi Mun-yol: stranger than fiction"
by HanCinema is licensed under a Creative Commons Attribution-Share Alike 3.0 Unported License.
Based on a work from this source