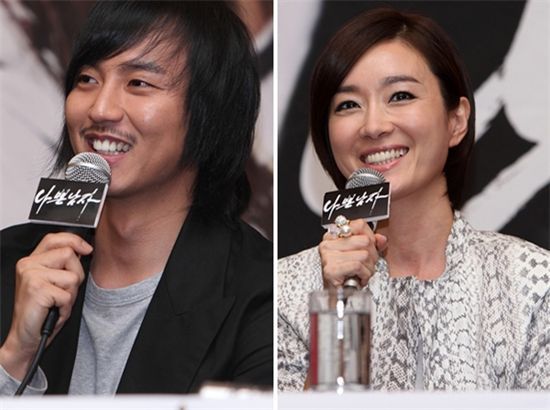 Q: Will each cast member explain how you have been preparing to portray your character as well as your determination for the show.
Kim Nam-gil (Kim NG): When I was offered the role for "Bad Man" it was a few days after "Queen Seon-deok" finished its run so I was worried that I wouldn't be able to portray a new character because I hadn't emptied myself of my previous character Bidam. The conclusion I came to after discussion with director Lee Hyung-min was that although there may be some areas in which I wouldn't be able to rid myself completely of Bidam, I would try to act with more depth rather than change myself in various ways. That's why I'm putting an effort into depicting my character Shin Gun-wook from "Bad Man" as someone with more depth in terms of both expressing his pain or sadness.
Han Ga-in (Han): I hadn't acted in a while so I was worried and had some concerns but after meeting with the director I became greedy about my role because I thought I would be in an environment where I would be able to converse a lot with other people on set. It helps a lot to be able to share your concerns with the rest of the cast on set. I wanted to play a part in making "Bad Man" become a drama that would last in people's memories by portraying my character Jae-in in a way that people could relate to her and have her blend in in a way that the audience will like her.
Oh Yun-soo (Oh): An actress always wants to do melodramas, regardless of her age, and I don't know for how long I'll be able to do them but I chose this drama because I thought it suited my age. Those around me tell me that I am lucky to have shot a drama with a younger man like I in the drama "Bitter Sweet Life" and now with Kim Nam-gil. (laugh) I will work hard so that my fellow housewives will feel a vicarious thrill.
Kim Jae-wook (Kim JW): I feel happiness everyday from the process in how the director and actors communicate a lot and openly share their opinions and feelings. Other directors so far had tried to maximize the image I had portrayed from my previous roles so I am thankful to director Lee for noticing a completely different appeal in me and I am working hard in order to meet his expectations. If I had played characters which keep their emotions to themselves, Tae-sung is a character who is straightforward and reveals his emotions so I'm hoping I will do a good job in portraying that.
Jung So-min (Jeong): As I was preparing for my character Monet, I found out many things about myself as well. Since this was my first acting role, I don't want to try to be too good but little by little, ease into my character.

Q: Besides "Bad Man", your film "The Day Before", another melodrama, is set for release soon too. Is there a reason you choose to take on roles in melodramas?
Kim: Honestly, melodrama is an extremely difficult genre to express but I had shown my values regarding relationships and love through my work while they had also changed due to my acting experiences. Instead of constantly being handed melodrama scenarios, I think I go after the scripts that are quite melodramatic. In "Queen Seon-deok", I had some romantic scenes with Lee Yo-won but before that in MBC drama "5 Republic", there were many scenes I had to shot with men so I was hoping I would get to work with a female at least for work... (laugh). I also think there are a variety of things that can be expressed through the single genre we call melodrama. In "Bad Man"", there is a passionately romantic scene between Oh Yun-soo and myself and I was trying to be careful because I have already shot quite a number of bed scenes or played roles where I bare my skin. (laugh) Since this is a drama we've had to adjust the level of that so that even if I am wearing all my clothes or haven't taken off all my clothes, I would still seem sexy.

Q: You shot a drama with married actress Lee Yo-won and now you are partnered with Han Ga-in and Oh Yun-soo who are also both married women. Are there any advantages to that?
Kim: When I was shooting with Lee Yo-won, I don't think I paid much attention to her husband because he wasn't an actor. But Oh Yun-soo and Han Ga-in are both married to actors so I'll ask them how their husbands are doing. The difference between shooting a melodrama with married and single actresses are they themselves seem to feel more comfortable and talk openly. It gives us a chance to become close and talk about this and that while not having to worry about getting involved in a scandal. In a way, married people are my seniors in life so I can learn a lot from them. I want to shoot more melodramas with married actresses from now on. (laugh) 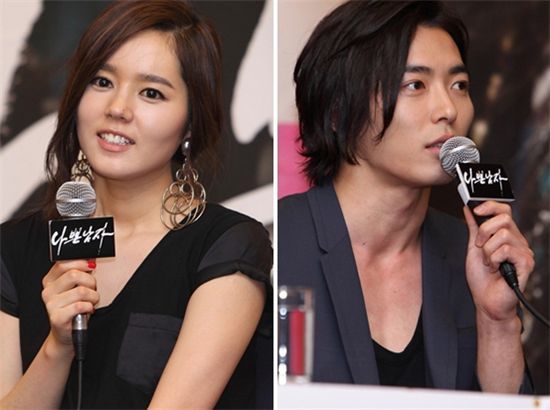 Q: In the drama, your character Shin Gun-wook seems to be an experienced sportsman because he does extreme sports like paragliding and scuba diving. Do you personally enjoy such extreme sports?
Kim NG: Gun-wook's job is a stunt man and amongst those who are actually have that job in real life, can pull off roles in both present and historical dramas while being certified in a variety of sports. So I too think I should not lack in any way in expressing that. I was worried when I first got the script because I didn't know how I would express my character but I actually like sports so although I don't have much time, I'm trying my best to learn and express everything myself.

Q: How does it feel to resume your acting career after taking such a long break and what has your family's response been like?
Han: I somehow ended up resting for three years which has flown by so quickly. I've had a normal daily routine which has kept me so busy that I didn't know this much time had passed. I became really greedy about taking on "Bad Man" because I hadn't felt so strongly about taking on a role in such a long time. My family is very happy of course, and they have been supportive and considerate so I won't have a hard time on set.

Q: There was an article which said you will show a shockingly sexual side to you through "Bad Man" -- the most shocking in your 20-year acting career.
Oh: You don't know how startled I too became after reading that article. There are some romantic scenes but there will be a limit to how much is shown since this is television and not film... Isn't that right, director? (laugh) The script hasn’t even been written that far yet but in the beginning, my character Tara tends to avoid Gun-wook rather than like him. However, at one point, I think I will be expressing the heart fluttering love she experiences after never having been in love before because she was wed under an arranged marriage. I haven't prepared anything in particular to play my role.

Q: I'm sure it was a different experience for those of you who, since mid-February, have been shooting on location in Japan which is relatively isolated compared to being in Korea.
Kim NG: It can be hard to film in the countryside or overseas but it's a great chance for the actors and staff members to bond or open up to each other. When we first got to Japan, I couldn't help becoming close with Kim Jae-wook because he grew up in Japan and speaks the language fluently. (laugh) Ga-in and I only knew simple Japanese phrases and we weren't able to communicate. Even when we went to a restaurant, we couldn't read the menu so the chef would come out and show us pictures of the food. But everything was much easier when we went with Jae-wook so I think that helped us become closer. That's how we became close, by helping each other out, and I think the viewers will be able to notice it because such a bond helps the actors focus better. And just meeting new people and creating a relationship with them, outside of work, is always a good thing. So after our shoots, we would gather together in a room and talk about what happened today, what to expect tomorrow, monitor each others scenes and sometimes we would bad-mouth the director. I'm sorry director! (laugh)
Han: I think I was able to become comfortable with everyone from the start because I had to quarrel for my very first scene. And in Korea, once you finish shooting for the day, everyone usually goes home but in Japan we stayed in a hotel for almost 20 days so we ended up feeling like close next-door neighbors. I found out that Kim Nam-gil and I are just a year apart, that we have the same blood type and other things in common. Thankfully, Jae-wook took care of our food orders and made sure we always had enough soup. It was so much fun and the atmosphere on set was great so we even mentioned how great it would be if we kept doing this till the drama was over. (laugh)
Kim JW: The older actors and actresses took good care of me. It was great being in the room next to Kim Nam-gil because since he has so many fans, his room would always be filled with cookies and processed goods. It felt like an imported goods store. I never asked for any of it but he always made sure I was eating well and I realized from the start that he is a good person so I tried to make sure I was being respectful to him. (laugh) Han Ga-in, who had a goddess-like image from the commercials, also took very good care of me while we joked around and acted together. I think everyone was nice to me since I was the youngest.

"Press conference for drama "Bad Man""
by HanCinema is licensed under a Creative Commons Attribution-Share Alike 3.0 Unported License.
Based on a work from this source