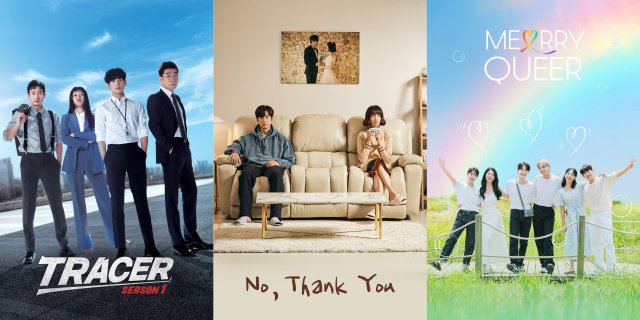 The number one 100% Korean content streamer KOCOWA is excited to celebrate its 5th Anniversary this summer by offering its dedicated audience of K-culture fans five popular Korean TV shows exclusively on the KOCOWA app and on their channel on select partners such as Prime Video, Roku and Comcast.

In addition to KOCOWA Exclusives hits like "It's Beautiful Now" and "Tracer", the five new exclusive shows are Merry Queer, the very first Korean LGBTQ+ reality dating show; "Hunted", a new drama about all of the secrets brought to light as a mountain village searches for a missing child; "No, Thank You", a show about a new wife learning to deal with her traditional in-laws; "High Kick!", a beloved ensemble sitcom in a vein similar to Modern Family; and Dopojarak: Story of Homme the K-Wanderer, that features huge stars like Kim Jong-kook from Running Man, Steve Sanghyun Noh from "Pachinko", Ji Hyun-woo from the recent hit "Young Lady and Gentleman", Joo Woo-jae from Love Naggers, and Olympian Hwang Dae-heon, as they travel around the world introducing people to all things Korean.

KOCOWA has been on a fantastic trajectory since its 2017 launch with 40% YOY growth. In addition to the app and device partners Apple, Google, Roku, Samsung, LG Smart TVs, etc., KOCOWAk has also set up B2B deals with a number of partners including MVPDs Comcast Xfinity X1, Flex + Cox Communications, The Roku Channel, Amazon Prime Video, OnDemandKorea, among others, with more to come.

CEO of waave Americas, the parent company of KOCOWA, KunHee Park notes, "leading the wave of Korean content going global has been exceptionally gratifying these past five years. Being able to bring a diverse array of content to our audiences is very important to us. Seeing the ever-increasing subscriber base for KOCOWA, along with other Korean global hits, and pop stars like BTS, show the world is very interested in Korean content. We are excited to bring some of the best and most diverse Korean TV to a global audience as we continue to expand to new territories and offer programming subtitled in more languages".

Truly the ultimate destination for Korean entertainment, on KOCOWA customers can watch select shows on the same day they air in Korea, like their favorite idols on music chart shows, and dig into thousands of high-quality library titles. Discovery is easy, as audiences can immerse themselves in award-winning relatable comedies and dramas, and hilarious reality competitions. For fans of K-pop, there are more than enough idols' moments to binge on.

As the service provider in the Americas with the largest library of Korean content, KOCOWA has quickly risen as an international platform since 2017. KOCOWA's millions of viewers are diverse, with 90% of viewers of non-Korean ancestry, in the prime under 44 age demographic, and female. Programming is available in real-time after broadcast airtime in Korea, making KOCOWA the preferred destination for fans to watch new series, and award-winning library titles, or to discover new and exciting Korean content available only on KOCOWA.