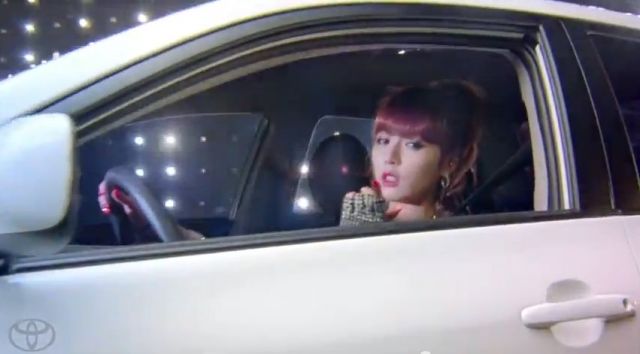 Mnet America (www.mnetamerica.com), a youth entertainment brand for all things Asian cool, and Toyota have partnered to bring music fans an interactive experience as part of a campaign for the 2013 Toyota Corolla. The campaign features a new music video shot in Los Angeles starring Hyuna, a K-Pop artist known for appearing in PSY's "Gangnam Style" video and for being a member of popular group 4Minute. The Corolla is integrated into the video, which features Hyuna's new song "My Color".

"It is great that Toyota understands the power K-pop has here in America and is using cutting-edge technology to connect with its audience", said Ted Kim, CEO and president of Mnet America. "We're thrilled to collaborate with them on this project".

The program is supported by a new Toyota mobile app that allows fans to insert their dance moves and singing into the Hyuna video. YouTube sensations Ryan Higa and D-Trix were the first to create their own custom videos using the just-released app, showing fans just how fun and easy the experience can be. Two exclusive versions of their "My Color" videos can be seen at www.YouTube.com/MnetAmerica. Direct links can be found here:

Fans that watch the Higa and D-Trix versions and use the Toyota app to upload their own video response will be entered into Mnet America's "Corolla Has My Color Video Contest". The response video with the highest number of views will be eligible to receive an iPad.

In addition to the video and contest, behind-the-scenes footage into the making of "My Color" and an ainterview with Hyuna were included in an episode of Mnet America's weekly talk show "Danny from LA". The hosts of the show, Danny Im and Kevin Sheih, also made their own versions of the "My Color" video. The episode can be viewed in its entirety on Mnet America's YouTube channel here: Part 1, Part 2 and Part 3. New episodes of "Danny from LA" can be seen Thursdays at 7:00 p.m. ET/PT on Mnet America.

Mnet (www.mnetamerica.com) is a youth entertainment brand for all things Asian cool. It uses video, digital, experiential and social media to reach Millennials with lifestyle content inspired by Asian pop culture and entertainment. This includes the first and leading 24/7 English-language television network in the U.S. targeting fans of K-pop music, anime and other genres of entertainment growing in popularity throughout Asia and around the world. An advertiser-supported network –distributed in over 30 DMAs through Comcast Cable, Time Warner cable, FIOS TV, Cox cable, Charter Communications and via TV Everywhere – Mnet is the first U.S. television property of CJ Entertainment & Media Group, Asia's leading vertically-integrated entertainment company and a unit of CJ Corporation. Mnet is headquartered in Los Angeles, can be found onhttp://www.facebook.com/MnetUSA, on Twitter @MnetLA and on Tumblr http://mnetamerica.tumblr.com/

Toyota Motor Sales (TMS), U.S.A., Inc. is the marketing, sales, distribution and customer service arm of Toyota, Lexus and Scion. Established in 1957, TMS markets products and services through a network of nearly 1,500 Toyota, Lexus and Scion dealers which sold more than two million vehicles in 2012. Toyota directly employs nearly 30,000 people in the U.S. and its investment here is currently valued at more than $18 billion. For more information about Toyota, visit www.toyota.com or www.toyotanewsroom.com

"[Press Release] Mnet America Partners with Toyota to Release Interactive Hyuna Music Video and Launch Fan Video Contest"
by HanCinema is licensed under a Creative Commons Attribution-Share Alike 3.0 Unported License.
Based on a work from this source