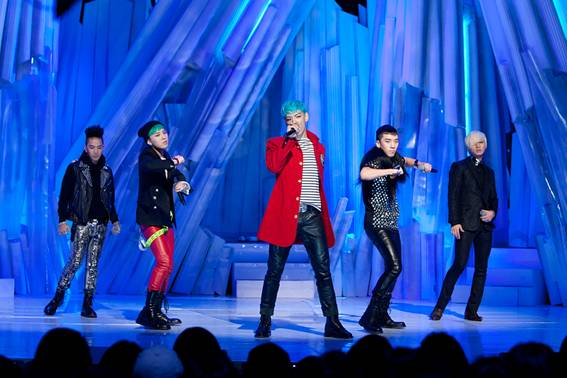 - The entire BIGBANG crew including G-Dragon, T.O.P (Choi Seung-hyun), Taeyang, Daesung, and Seungri set to appear in full force
- Performances only dreamt of until now to unfold on November 22 at the AsiaWorld-Expo (AWE) in Hong Kong

Worldwide music sensation BIGBANG is confirmed to perform at the 2013 Mnet Asian Music Awards (MAMA) scheduled for November 22 at the AsiaWorld-Expo (AWE) in Hong Kong, announced Asia's No. 1 Content Company CJ E&M today. The appearance of BIGBANG, as well as other to be announced bands and artists, highlights MAMA's prominent role as an ambassador of Asian music and culture to fans around the world.

Named as the Best Worldwide Act at the 2011 MTV Europe Music Awards, BIGBANG has captured legions of devoted fans from around the world. Formed in 2006 and including members G-Dragon, T.O.P (Choi Seung-hyun), Taeyang, Daesung, and Seungri, the band is known for its unique brand of music, as well as trend-setting fashion styles. Notably, BIGBANG has won accolades from experts throughout the music industry for the group's skill in composing and producing its own high quality music.

BIGBANG catapulted into the public scene with the hit song " Lies " in 2007. They followed on this success with popular albums like Hot Issue and Stand Up, at which point wide recognition began to pour in including in Japan as "the Korean group that Japanese fans wish to see the most". They were also the first foreign group to be awarded "Best Newcomer" from the Japan Cable Broadcasting Station, and "Best New Artist" at MTV Japan. In 2011, BIGBANG released the successful album Tonight, and in 2012 the mini album Alive. Last year, BIGBANG was recognized with the Artist of the Year award at 2012 MAMA.

"We are excited to welcome BIGBANG including G-Dragon, T.O.P (Choi Seung-hyun), Taeyang, Daesung, and Seungri to Asia's premier music festival, 2013 MAMA", remarked Ms. So-Yeon An, Chief Producer of 2013 MAMA. "Fans should get ready for what will truly be a performance only dreamt about until now with all the expertise and fifteen year production know-how of Mnet".

Far more than a year-end music awards ceremony, MAMA is Asia's premier music festival acclaimed by fans around the world for its advanced stage production and mega-scale performances. MAMA's origins trace back to 1999 and the Mnet KM Music Festival (MKMF), an awards show instrumental at the time in leading growth of the Korean music industry. In 2009, MKMF was renamed the Mnet Asian Music Awards (MAMA), and in 2010, the festival started its Asian tour in Macau. Last year's MAMA was held at the Hong Kong Convention and Exhibition Centre (HKCEC) in Hong Kong.

"[Press Release] Worldwide Music Sensation BIGBANG Confirmed to Appear at the 2013 Mnet Asian Music Awards (MAMA)"
by HanCinema is licensed under a Creative Commons Attribution-Share Alike 3.0 Unported License.
Based on a work from this source