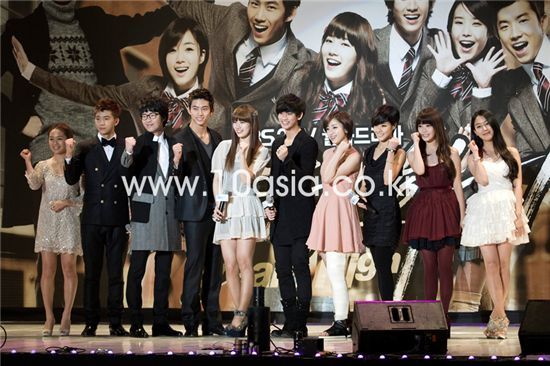 Co-produced by Bae Yong-joon of KEYEAST and Park Jin-young of JYP Entertainment and starring members from idol groups 2PM, T-ara and miss A and female singer IU, it is obvious what KBS TV series "Dream High" wishes to be -- a drama which shows how the "Dream Factory" really works along with the hardships young trainees go through to become a star, a drama about young people, and a drama where idols stars are the main characters.

"Dream High" shows where it is headed to from the beginning with the story starting in the year 2018 with a man named 'K' from Korea sweeping the Grammy awards to become a world star and Jung Ha-myung (Bae Yong-joon), the director of Kirin High School of Art, reminisces on the time when he himself was a freshman at the school. And amid the process of revealing who 'K' is, the drama depicts on the process of how six new students from different environments work toward achieving the same dream -- countryboy Sam-dong (Kim Soo-hyun) who is born with an amazing singing voice, Jin-guk (Ok Taecyeon) the rebellious yet brilliant dancer, Hye-mi (Suzy) who once dreamt of becoming a great soprano, Baek-hee (Ham Eun-jung) who tries to rid herself of her inferiority complex over Hye-mi, Jason (Wooyoung) the skilled dancer from overseas and Pil-sook (IU) who cannot say much about her looks but can certainly sing.

As revealed through its casting, "Dream High" aims to secure two things at once: the brilliant performances staged by young idols and the excitment felt from a coming-of-age drama. The main leads of the drama are actual idol stars in Korea which includes Ok Taecyeon and Wooyoung from 2PM, Ham Eun-jung from T-ara, Suzy from miss A and female solo singer IU, all to give a better picture of the pains and agony young talents go through before receiving the spotlight. They will be joined by actor Kim Soo-hyun who appeared in SBS series "Will It Snow for Christmas??" and "Giant" and other veteran actors Uhm Ki-joon, Lee Yoon-ji and Lee Byung-joon will appear as teachers, adding more to look forward to in the drama.

The passion and agony of youths

As most of the main leads of the drama are idol singers and acting for the first time, the expectation for "Dream High" is split between concern and anticipation. The press conference which kicked off with rapper SanE's stage, followed by B-boy team "Fusion MC" performance and congratulatory performances from girl groups T-ara and miss A, resembled more of a showcase for singers than a TV series. But the press conference pinpointed to exactly where the charm of the drama will lie in the future. "I believe it only makes sense that idol stars who can sing and dance take the main roles for the sake of reality", remarked Bae Yong-joon. Park Jin-young too stressed that he put "most weight on portraying the how idol stars are born, making it real as possible". This may be true since there may not be a cast that is better fit to express the passion and agony these youths experience through their singing and dancing than current idol stars. Also, thanks to the star power of actor Bae and 2PM members, every time their faces were shot close-up during the video that showed highlights from the upcoming show, cheers burst out from among their fans from Japan, China and other countries in Asia.

IU and Woo-young from 2PM revealed at the press conference that they are thinking back on the hard times they had as trainees by reading up on the diaries they kept at the time. True to their words, the success of the drama will depend on how well these idol stars relive those times. The drama will go on air on January 3.

Introduction to the main characters

Song Sam-dong (Kim Soo-hyun): As a country boy, he grew up dreaming of becoming a ranch owner someday. But by recommendation of director Jung Ha-myung and blinded by his love for Hye-mi, he finds himself admitted to Kirin High and dreams of becoming the best singer there is.

"There is lot left to be desired for in my dancing and singing skills so I'm pushing myself two to three times than other members of the cast. I can identify with Sam-dong in the sense that he's not readymade either. Since I'll be working with idol singers - I used to be their fans - I really want to show them how much I studied their world".

Ko Hye-mi (Suzy): She once dreamt of becoming the next Sumi Jo, the world-renowned soprano from Korea. An elite girl, once filled with prejudice against pop culture, however ends up attending Kirin High regardless of her intentions due to financial problems at home. The character goes through an eye-opening experience as she gets to know Sam-dong and Jin-guk.

"There is so much I lack as an actor so I'm asking my senior actors about everything. Whether it's singing or acting, they're both difficult".

Jin-guk (Ok Ok Taecyeon): A gifted dancer, he used to spend his time dancing with friends he met on the streets, away from the cold treatment he receives at home. By chance he takes part in audition for Kirin High and there his life changes completely.

""Cinderella"s Sister' was simply a challenge but this will be a learning experience on a higher level based on my previous experience. It would be too early to say that I'm officially taking on acting with this role but I feel much more confident this time".

Yoon Baek-hee (Ham Eun-jung): She used to be an ardent follower of Hye-mi. She even ended up in Kirin High after following Hye-mi to the school's audition. However, after being insulted by Hye-mi, she stands up as a bitter rival -- an ugly duckling who turns into a white swan.

"This is my first role as one of the main leads responsible for how well the show does. In fact, I see this as my very first drama. I suggested that I wear outdated clothes and glasses to make my transformation more evident later on".

Jason (Wooyoung): A dancer from overseas. Having entered the school with the best score, he can make both Sam-dong and Jin-guk sweat with his superior skills in both singing and dancing. However, he lacks the motivation to succeed, being only into enjoying himself.

"Only after you learn to express your feelings well in either singing or acting can you get your message across. Big bro Jin-young (Park Jin-young) always told me I should sing as if I'm really trying to say something. I believe that applies to acting too -- that you need to do it with sincerity, not fake it".

Kim Pil-sook (IU): There is not much that is worth admiring about her on the outside but nothing can stop her when it comes to singing. She is a very spoilt ugly duckling who believes she is the best. However, she follows around Jason trying to change the way she looks just to win his affection.

"Before my debut, I used feel insecure about my looks too and hated to stand in front of people. So I can identify with Pil-sook in the way in how her confidence grows when she starts singing. I plan to reveal the person I was as a trainee rather than creating an artificial character".

"[PREVIEW] KBS TV series "Dream High" "
by HanCinema is licensed under a Creative Commons Attribution-Share Alike 3.0 Unported License.
Based on a work from this source