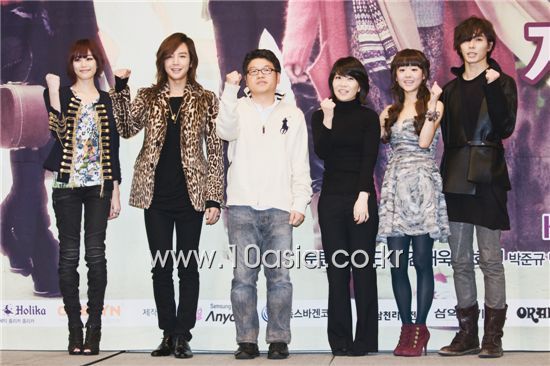 A couple walks along a tranquil residential area that sunrays are breaking into. The guy plays a guitar and the girl takes photographs. Then shortly after, this couple who could not possibly look any happier, run down a street while each holds the hands of a different man and woman. The four meet in the middle of the street and wave to each other, smiling. This one-minute 45-second teaser trailer of upcoming KBS TV series "Marry Me, Mary!", revealed at its press conference on Wednesday, showed the relationships between the main characters and the atmosphere they will be surrounded by in the drama.

"Marry Me, Mary!', based on a comic of the same name by writer Won Soo-yeon, is a romantic comedy which shows how main female character Mary (Moon Geun-young), not at all ready to get married, becomes concerned about the realistic issues and love and marriage, in between two men. Mary, who has suddenly become a married woman because her father forced her into a contractual marriage with the young and wealthy Jungin (Kim Jae-wook), makes things worse by ending up in two marriages by taking a fake marriage photo with indie band vocalist Mugyul (Jang Keun-suk). And she must decide on one after being married to both for 100 days. With the appearance of Seojun (Kim Hyo-jin), Mugyul's former girlfriend and also actress who has signed with Jungin, the four slowly start to get to know each other and love and envy.

The video clips revealed on the day of the press conference showed that the producers had put a lot of thought into materializing the sentimentality felt in romantic comic books onto the screen. The scenes shot on the streets of Hongik University, where Mugyul is based, contained the bright autumn sunlight captured by the camera to create delicate and soft images. The fact that joint producers Hong Suk-goo and Kim Young-kyun are both taking their first tries at mini-series has also seemed to have played a role in creating a 'young' picture.

Storywise, the drama's greatest chance at doing well lays in how well it makes its viewers understand 'double marriage' which could be an unfamiliar matter to many. And unlike the original work which has ben published serially for over two years, the time limitation the show will have as a 16-part drama must be taken into consideration. That is why the producers said they loosely adopted the set-up from the original series and re-created the comic into a realistic drama. Writer In Eun-ah, in charge of the show's script, explained that the characters and situations they are put in will be different and that she "attempted to create a fun and easy-to-watch story about marriage and families". Hong Seok-goo, who asked the actors not to read the original comic since the story will be different, said "The characters are from the romantic comedy genre but about a realistic story".

The bright imagery, the casting of Jang Keun-suk and Moon Geun-young, and a romantic comedy by Won Soo-yeon. The three factors may remind one of TV series "Full House" which was popular throughout Asia. And "Marry Me, Mary!", being jointly produced with Japan's ACC, has already been pre-sold to Taiwan and China at record high prices. KBS' drama department director Lee Eung-jin did not fail to hide the quaint excitement he felt over the drama. "The top actors of the second Hallyu generation are stepping into the world. This will be an opportunity to show Korea's cultural power". But like Jang said, that he is "trying to make a good drama ahead of it being a Hallyu content", it will be difficult to ascertain the success of a drama whose degree of completion has not been vouched. Director Hong Seok-goo who said, "I see myself when I was in my 20s overlap with the characters and actors in their 20s". And writer In Eun-ah she will write the story "honestly" and "work hard at it". Will the two be able to tell a 'real' story about the love and marriage of people in their 20s? "Marry Me, Mary!" premieres at 9:55 p.m. on November 8.

"[PREVIEW] KBS TV series "Marry me, Mary!""
by HanCinema is licensed under a Creative Commons Attribution-Share Alike 3.0 Unported License.
Based on a work from this source