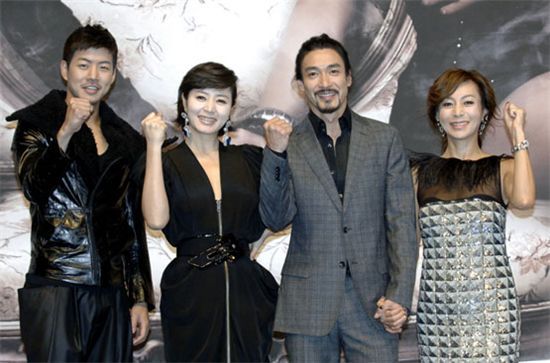 Contrary to the pastoral vibe its title gives off, MBC's upcoming TV series "Home Sweet Home" shows the process of how trust between a married couple shakes and misunderstandings lead to distrust in the format of a mystery drama. At a glance, elements such as the mystery surrounding a questionable death, a war of nerves with in-laws over inheritance, and two friends' jealousy and infidelity surrounding a man could make "Home Sweet Home" seem like a trashy drama. And the show suffered from controversy even before going on air when novelist Gong Ji-young openly expressed her displeasure of a drama being created with the same name as her bestseller book. Moreover, some have doubted the show will be able to survive amongst its competitors with its trashy-drama elements as well as being the follow-up show to "Naughty Kiss", ending its run this week, which has maintained low ratings in the five-percent range.

The word that the director and cast of "Home Sweet Home" emphasized at the press conference held on Tuesday at the Grand Hyatt Hotel was 'sympathize'. Oh Kyeong-hoon, in charge of producing the show, said "Don't trashy dramas start with families breaking up with no probability. But our drama is persuasive in showing how relationships between people start getting shaky. Married couples are the smallest unit cell of society and how that is maintained is probably a concern that many people have in their hearts. Our goal is to lend a word of support of sympathy to them". Actress Kim Hye-soo, who said she did not want to let the drama go because she knew it is difficult to be handed a great script, also said, "There is no definite virtue-and-vice structure in our drama. It realistically portrays the love-hate relationship between characters whose relationships have gone from love to hate. Hwang Shin-hye and Shin Sung-woo, who have been preparing for the drama for a long time after joining the show's cast since its planning stages, both remarked on how strongly they were able to relate to the show in terms of how the married couple is portrayed.

To questions expressing concerns that the show would be up against fierce competition in the Wednesday and Thursday primetime time slot, Yoo Hyun-mi who previously won a prize for top scenarist and director Oh Kyeong-hoon who has been preparing the show for a year, explained, "I analyzed the trend of change in viewers while being producer-in-charge for two years for Wednesday and Thursday night dramas. Our drama is targeted at women in their 30s and 40s while incorporating mystery so it will also be fun for people who also like American and Japanese dramas". The cast of the show did not seem to be under much pressure for the show to see high ratings including Kim Hye-soo who said she will "not feel even an inch of regret" regarding how the show is made regardless of how successful it becomes and Shin Sung-woo who asked the show not to be compared to other dramas. Will "Home Sweet Home" be able to capture people's hearts with 'sympathy'? The show premieres at 9:55 p.m. on October 27.

"[PREVIEW] MBC TV series "Home Sweet Home""
by HanCinema is licensed under a Creative Commons Attribution-Share Alike 3.0 Unported License.
Based on a work from this source