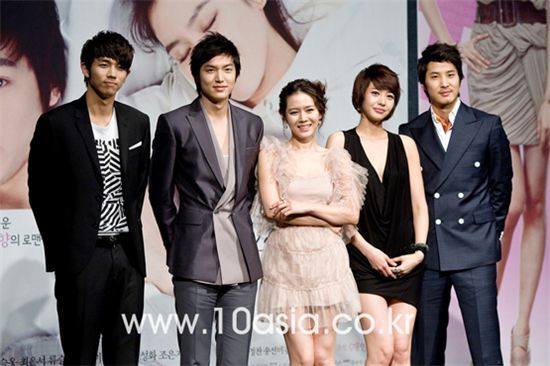 In "Sex and the City", Carrie Bradshaw had Stanford and in "Personal Taste", Park Gae-in (played by Son Ye-jin) has Jun Jin-ho (played by Lee Min-ho). "Personal Taste" begins with Gae-in fantasizing over having a gay friend after losing her boyfriend to one of her closest friends, leading to her not trusting both men and women. Jin-ho, who is mistakenly regarded as being gay, ends up living with Gae-in after deceiving her because he is greedy about work. As the relationship between the two develop from one between a past lover and a close friend to rivals at work and rivals of love, "Personal Taste" becomes a drama which is not just about romance with a man pretending to be gay but rather shows the development of the interpersonal relationships among the characters. "Personal Taste" was written by Lee Sae-in, the writer of the original work by the same name, so fans of her work will not be disappointed of "Personal Taste" living up to its original story.

If you know having a gay friend like Lee Min-ho is just a dream: 6 points
If you still want to dream such a dream: 8 points

At the press conference for "Personal Taste" on Thursday, director Son Hyung-suk said that the drama is "cheerful and bright and will make you want to be in a relationship". The difference between other dramas that are premiering on the same day as "Personal Taste" is actress Son Ye-jin's portrayal of her character Gae-in. "Gae-in is unlike the other characters that I have played before in that she is fun and comical", Son revealed. The video containing highlights shown at the press conference introduced the audience to unforced, natural comedy. A series of incidents which begin with her clumsy and easygoing attitude and the mistake Min-ho's immature and idiotic work colleague Tae-hoon (played by Im Seulong) snowballs to create more misunderstandings which lead to the encounter and unexpected accidents between Gae-in and Jin-ho. Hence, the story may sound familiar but is cheerful and bright. In the end, "Personal Taste" falls into the romantic comedy genre but if it wants to follow in the footsteps of becoming a 'drama that makes the viewer want to be in a relationship' like "Pasta", it will have to do more with its typical storyline between a 'woman who is a beginner at love and a cheeky man'. Will "Personal Taste" become a drama which satisfies the taste buds of the general public by "allow the audience to feel happy first"?

"[PREVIEW] MBC TV series "Personal Taste""
by HanCinema is licensed under a Creative Commons Attribution-Share Alike 3.0 Unported License.
Based on a work from this source