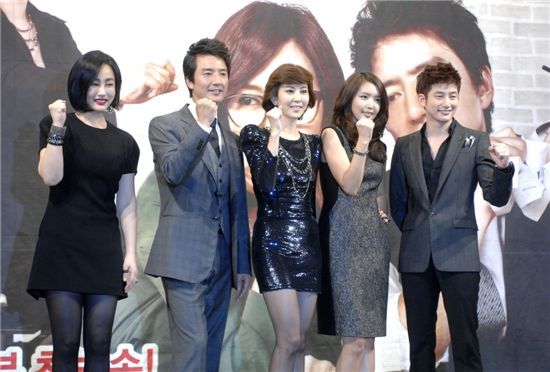 "It's better to raise a pet, whether it be a dog or a cat, if you want to lead a healthy life as a single woman for a long time". Upon hearing this advice by Queens Group executive director Han Song-i (Ha Yoo-mi), the finicky 'Gold Miss' Hwang Tae-hee (Kim Nam-joo) decides to raise something that is not a dog nor a cat. And that is none other than the new late-bloomer employee Bong Junsu (Jung Joon-ho) who is also the son of her mother's least-favorite friend. And Tae-hee, who had believed getting married to the one you love is the happiest thing that could happen in life, marries Junsu although her family disapproves. With the marriage, Tae-hee loses favor with Han Song-i so she leaves the company to focus on supporting her husband instead, but the moment Bong gets fired by Koo Yong-shik (Park Si-hoo) who is both his junior from the military and the son of the chairman, Hwang decides she needs to make money to feed her family. The Queens Group that she returns to as a contract worker does not go easy on her.

MBC TV series "Queen of Reversals" which premieres on October 18 could be called season 2 of "My Wife is a Superwoman". The drama in which writer Park Ji-eun and actress Kim Nam-joo have teamed up again, continues its legacy as a comedy about the successful partnership of a married couple. But while in the original show the woman's role was limited to that of a housewife, the woman becomes the breadwinner in "Queen of Reversals". "While 'My Wife is a Superwoman' told about the ways a woman helps her husband, the woman takes on a much more active role in 'Queen of Reversals'", explained Park.

While Hwang Tae-hee is the working woman who is expected to be a superwoman at both work and home, Han Song-i is a 'Gold Miss' who focuses only on her work to be acknowledged for her ability by her male competitors by giving up on marriage. Including Baek Yeo-jin (Chae Jung-an) who fulfills her ambitions by using her looks as her weapon yet actually dreams of living a happily married life, the viewer will be able to tell that "Queen of Reversals" has shifted its focus more to women who work. That is why Ha Yoo-mi's statement is far from ordinary: "Our goal is to make viewers understand both woman who work within the system of marriage and those who have to give up on getting married and instead cling to work".

MBC, which allowed SBS' "Giant" to take over the No. 1 spot in the time slot that "Dong Yi" airs, will probably hope that the upcoming show follows in the footsteps of "My Wife is a Superwoman" which saw viewership ratings of up to 33.6 percent (AGB Nielsen Media Research). MBC's executive president Kim Jae-chul is said to have promised the cast that he will send them on trips should "Queen of Reversals" see ratings of over 30 percent. And it will be worth looking forward to Kim Nam-joo and Park Eun-ji have said of each other, "I'm not sure whether I'll ever get another script that is as realistic and relatable to as this one by Park Ji-eun's" (Kim Nam-joo) and "I couldn't think of anyone other than Kim Nam-joo to play this role". (Park Ji-eun). Will this drama, which in "My Wife is a Superwoman" had captured the hearts of housewives by showing how they so silently support their husbands in order to help them succeed, be able to capture the hearts of working moms who have to do well at both work and home? The first episode airs on October 18.