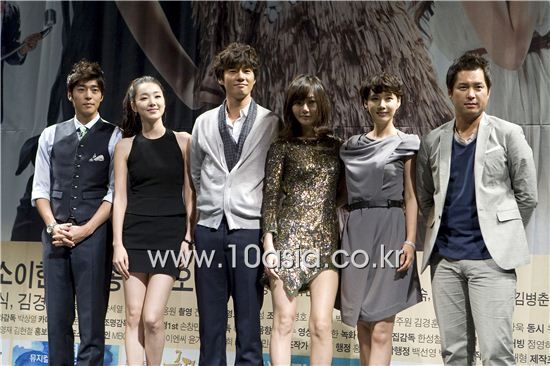 MBC weekend TV series "Gloria"
Scenarist: Jung Ji-woo
Producer: Kim Min-sik
Cast: Bae Doona (as Na Jin-jin), Lee Chun-hee (as Ha Dong-ah), So Yi-hyun (as Jung Yoon-seo), Oh Hyun-kyung (as Na Jin-joo), Seo Ji-suk (as Lee Kang-suk) and Lee Jong-won (as Lee Ji-suk).
In one sentence: A nothing-can-bring-me-down drama where the main female character who lives with her physically challenged older sister yet are without parents, sets out to live a new life in her thirties, chasing after her dream to become a singer
Premiere Date: July 31, 2010 at 7:55 P.M.


Major broadcaster KBS has held onto the reigns of weekend dramas for a while now. For the past two years, their shows including "Mom's Dead Upset", "My Too Perfect Sons" and "Three Brothers", have scored viewership ratings reaching over 40 percent, proving that they have been successful at attracting a wide range of viewers. That is why MBC has decided to pursue the strategy of differentiating itself by breaking from the formula of 'weekend drama = family drama" through "Gloria" which talks about the dreams of male and female characters who are not in their teens but have yet to become middle-aged.

Anticipation Quotient
If you're looking for a younger weekend drama: 8
If seeing a nothing-can-bring-me-down type character even on the weekend is too much for you: 6

"Gloria" sets forth Na Jin-jin (played by Bae Doona) as the main character, an energetic and vigorous child head of a household, telling the story of how she works to achieve her dream of becoming a singer at not such a young age. The characters that surround her are either "those people who live on the fast lane and those who fall behind" as scenarist Jung Ji-woo said, but that only comes from the difference in their financial status. Whether it be third-rate gangster Dong-ah (played by Lee Chun-hee) who is Jin-jin's best friend or Yoon-seo, who has grown up in a conglomerate family, all of them have failed to find a specific dream they want to achieve in life. And of all these characters who each suffer from a different type of deficiency, Jin-jin, working at the coat room of a night club, is the first to discover her dream. She who had been working hard at making a living to support her physically challenged sister Jin-joo (played by Oh Hyun-kyung) without her parents, one day happens realize her dream after standing on stage instead of the vocalist for the band at her night club.

At the press conference, scenarist Jung said, "I am trying to figure out how to tell a different story although it will not stray far from the original nothing-can-bring-me-down type dramas". In her previous work "Wish Upon a Star", the main character played by actress Choi Jung-won was portrayed as someone who is not always cheerful and kind but instead an immature sister with four younger siblings who "lacks in a certain way because she doesn't have money yet is busy to make herself look pretty". It seems that the success of "Gloria" too will depend on how Na Jin-jin's character is portrayed.

"[PREVIEW] MBC weekend TV series "Gloria""
by HanCinema is licensed under a Creative Commons Attribution-Share Alike 3.0 Unported License.
Based on a work from this source