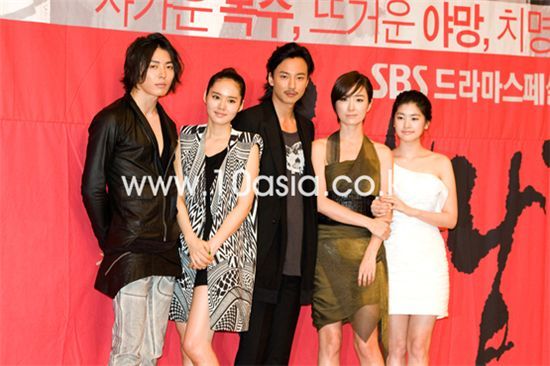 Scenarist Kim Jae-eun, Lee Do-yeong, Kim Seong-hee-I
Producer Lee Hyeong-min
Cast Kim Nam-gil (as Shim Gun-wook), Han Ga-in (as Moon Jae-in), Oh Yun-soo (as Hong Tae-ra), Kim Jae-wook (as Hong Tae-sung), Jung So-min (as Hong Monet), Shim Eun-kyung (as Moon Won-in)
In one word A man and woman who each dream of climbing the social ladder, try to woo children of a conglomerate family but end up falling in love with each other although there is more to it than just that.
Premiere Date May 27, 2010, 9:55 PM

During his childhood days, Gun-wook (played by Kim Nam-gil) is mistaken as the successor to Haeshin Group who was abandoned as a baby and starts living the life of his dreams after the family takes him in from an orphanage but a DNA test soon reveals he was lying and is heartlessly kicked out of the house. He who then grows up to be an all-around attractive man -- good-looking with great athletic and linguistic skills -- sets up an elaborate plan through which he approaches Haeshin Group's youngest daughter Hong Monet (played by Jung So-min) to recover the firm 'which was mine'. Tae-ra (played by Oh Yun-soo), Monet's older sister and the pillar of the Haeshin family, ignores and despises such a Gun-wook yet she starts to develop new emotions toward him the more she meets him. Meanwhile, Jae-in (Han Ga-in), who is beautiful and intelligent yet born into an average family, dreams of climbing the social ladder by betting her stakes on Tae-sung (played by Kim Jae-wook), the actual hidden son of Haeshin Group.

Anticipation Quotient
Kim Nam-gil, every girl's dream and Han Ga-in, every guy's dream, come together for the drama: 9
But it is not my dream to see them fall in love with each other: 7

"Bad Man" is a new production by director Lee Hyeong-min, the creator of melodramas such as KBS TV series "Sorry, I Love You" and "The Snow Queen", who is known for his unique sense of style and use of flowing and elegant imagery. It also stands at the center of attention yet is being burdened because it stars actor Kim Nam-gil who was much loved for his character as Bidam in 2009 hit MBC drama "Queen Seon-deok" and Han Ga-in who is making a comeback to the screen for the first time in three years. Oh Yun-soo who is expected to show the matured beauty of a middle-aged woman, like she did in MBC's "Bitter Sweet Life", and the new image Kim Jae-wook will take on, different from the 'pretty boy' roles he had played so far, are also arousing curiosity.

But like the director's description that the show "is a melodrama but different from my previous melodramas in that it contains a twist, mystery, revenge -- the hidden desires that modern people have", "Bad Man" catches one's eyes for its attitude which seemingly aims at not only looking into the desires hidden behind love but also at discovering why those desires are existent. That is why the success of this drama will depend on how convincingly it portrays Jae-in, the most frank female character you will have ever seen after Lee Soo-Jeong (played by Ha Ji-won) in "Something Happened in Bali", who stays true to her conventional desires and on how well conveyed the internal emotions are of bad boy Man Gun-wook who you 'hate the more you miss him'.

"[PREVIEW] SBS TV series "Bad Man""
by HanCinema is licensed under a Creative Commons Attribution-Share Alike 3.0 Unported License.
Based on a work from this source