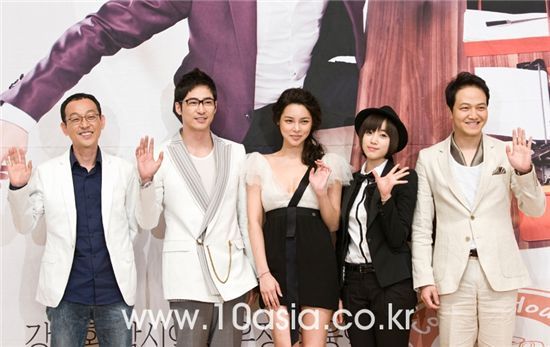 Starring Kang Ji-hwan (as Lee Jin-soo), Park Si-yeon (as Seo Eun-young), Ham Eun-jung (as Kang Seung-yeon), Jung Woong-in (as Han Ji-won), Park Jae-jung (as Kim Dong-wook) etc.
In one sentence Unemployed Seung-yeon (played by Ham Eun-jung), who was studying to become a public officer, opens her eyes to the world of coffee and romance as she meets fussy writer Jin-soo (played by Kang Ji-hwan) and starts working as his assistant
Premiere date May 17, 2010 at 8:50 PM

This drama celebrates the meeting of director Pyo Min-soo, who previously made KBS dramas "Worlds Within" and "Full House", and writer Song Jae-jeong who penned MBC sitcom "High Kick!" and "The Secret of Keu Keu Island" -- which indicates the blending of drama and sitcom elements in the show. This is the reason that one cannot jump to the conclusion that "Coffee House" is just an ordinary romantic comedy drama. The show's two main characters Seung-yeon, a girl with a sunny personality who wants to become a professional working woman, and Jin-soo, who is already a pro in his field, obviously follow the formula of a romantic comedy with their bickerings that eventually lead to their falling in love. However, the show attempts to display an element of reality as seen in sitcoms by, as director Pyo Min-soo explains, "having producers and actors each come up with half the writing and props for the show, which brings about many incidents that could happen in real life". And with Jin-soo's long-time friend and successful businesswoman Eun-young and her fiance Ji-son who pines for her affection, also pitch in their romance to viewers to increasingly entangle the story of "Coffee House".

Seung-yeon, who helps out at her parent's coffee shop "Palace Coffee" while studying to become a government worker, is just a jobless nobody. One rainy evening, she instantaneously falls in love with Jin-soo who happens to drop by "Palace Coffee" and starts working as his assistant after her schoolmate recommends her to Jin-soo. As she jumps into the world of professionals and tries to satisfy Jin-soo's picky taste in coffee, the amateur Seung-yeon begins seeing changes to her life. Novelist Jin-soo and book cafe owner Eun-young are long time friends who fight all the time but cannot sever their relationship because each knows how talented the other is.

The show takes off to an easy start since its theme -- books and coffee -- which is something that entices twenty- and thirty-something women and helps secure a solid target market. If the show's physical space -- coffee shop -- and the main character's profession -- which is a novelist -- blends well into the drama, "Coffee House" will be able to overcome the limitation of being a genre of a drama which is "a romance story which take place here-and-there". Just as recent MBC TV series "Pasta" had shown, in a refreshing way, the romance that takes place between its two main characters who worked in a hierarchy-ridden restaurant kitchen.

"Coffee House" reminds viewers of producer Pyo Min-soo's previous works -- "Full House" and MBC's "Coffee Prince" (Coffee Prince) -- because it has many similarities to the two hit dramas. Both are romantic comedies with fussy male characters and have titles ending in 'House', and it seemed Pyo was taking on the challenge of creating his own 'House series' just as director Yoon Seok-ho made his seasonal series with "Autumn in my Heart" and "Winter Sonata". People started worrying that the new show might be "the second Coffee Prince" since it uses coffee as its topic and stars another female character who looks and acts like a tomboy. But Pyo has revealed that "Coffee House" has "no special connection to 'Full House' and the fastidious personality of Jin-soo (played by Kang Ji-hwan) is different from that of Young-jae (character in "Full House" played by Rain)". He further explained the unique charms of "Coffee House", which is different from the charms of "Coffee Prince", saying that he "wanted to tell the story about people who were alienated culturally". Ultimately, what director Pyo Min-soo worried the most about and worked on the hardest to achieve was 'how different' he could make the new story from his previous ones. Can "Coffee House" come up with a new formula for romantic comedies and kick off a successful start to the 'House series'?

"[PREVIEW] SBS TV series "Coffee House" "
by HanCinema is licensed under a Creative Commons Attribution-Share Alike 3.0 Unported License.
Based on a work from this source