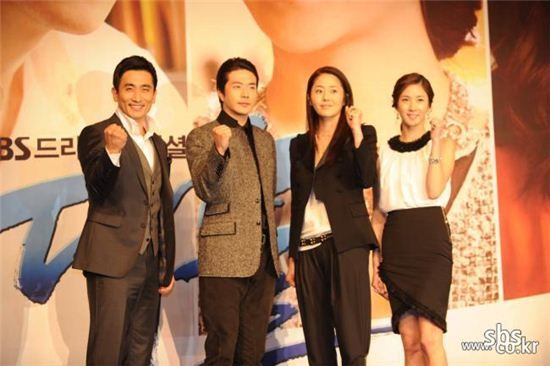 From left, actors Cha In-pyo, kwon Sang-woo, Go Hyun-jung and Lee Soo-kyung pose during a photocall of a press conference for SBS TV series "Daemul - Big Thing" held at the Lotte Hotel in Jamsil of Seoul, South Korea on September 29, 2010. [SBS]
Anchorwoman Seo Hye-rim (played by Go Hyun-jung), who gets fired while protesting about her husband's undeserved death, enters politics by proposal of Kang Tae-san (played by Cha In-pyo) who is a member of the ruling party and a strong candidate for the next presidential elections. With the help of Ha Doya (played by kwon Sang-woo) he had known since her childhood days, Seo Hye-rim eyes the position of president as well and Kang Tae-san, who has no thoughts of yielding to Seo, become rivals and clash against each other.

SBS TV series "Daemul - Big Thing", whose press conference was held September 29, was full of traces from certain incidents and characters from real life. SBS' drama department director Goo Bon-geun said, "Please look at this as just a drama that is completely unrelated to modern day politics", but it does not seem like it will be easy to separate it completely from reality in how from the first episode, incidents such as the sinking of a submarine and impeachment of a president appear. The sunken submarine, the controversy over humiliating diplomacy, an impeached president, a camera reporter who loses his life after being kidnapped in a disputed area, and a beautiful curator who uses artwork to lobby. "Daemul - Big Thing", which contains incidents which can be recognized by anyone who has watched even a little bit of news, is a fantasy and as well as satire of Korea's political scene.

"Daemul - Big Thing" is based on the second of the series of artist Park In-kwon's comic of the same name. The main story of the drama is no different from the original story in that it can be summarized as 'The project to create Korea's first female president', but it differentiates itself in the characteristics of the main characters and its structure. Seo Hye-rim's job has changed from being a female human rights lawyer to an anchorwoman-turned- environmental activist. The role of a back-stabbing womanizer-turned prosecutor that kwon Sang-woo has taken on has changed as well -- he is a combination of the Ha Doya and Ha Ryu brothers from the comic. How the absence of Ha Ryu who was a key character in the comic, will be substituted will be crucial to the series.

In the end, "Daemul - Big Thing" is about 'the good president that all citizens want'. Seo Hye-rim is close to the fantasy for viewers who dream of the ideal president but the incidents derived from reality suggest that "Daemul - Big Thing" will not end as a mere fantasy. The show's director Oh Jong-rok said, "It makes me think our society has become open enough for us to tell this sort of story through a drama but on the other hand, nothing is as polarized as when it comes to politics so I am still wondering how I can balance the story". It sounds similar to the difficulties Seo Hye-rim will have to face in her task to capture the hearts of people who are divided up with dramatic opinions. The first episode of "Daemul - Big Thing" will air at 9:55 p.m. on October 6.