What to expect from, or worry about, Lee Seung-gi, Shin Min-a and the Hong sisters 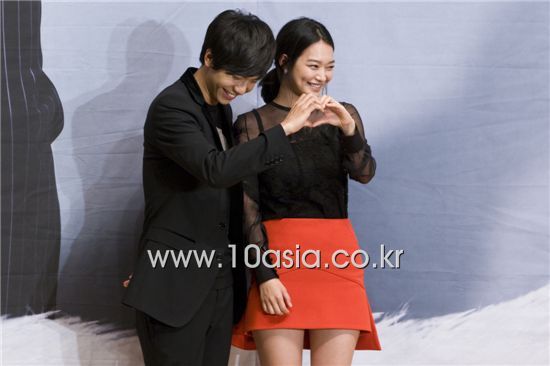 Korean actors Lee Seung-gi (left) and Shin Min-a at the press conference for their upcoming TV series "My Girlfriend Is Gumiho" held at SBS headquarters in Seoul, South Korea on August 4, 2010. [photographed by Chae Ki-won/10Asia]

Press conference for SBS TV series "My Girlfriend Is Gumiho"

'The Hong Sisters' are back. They joined hands with Lee Seung-gi, the so-called 'man of 100 percent viewership rating' while Shin Min-a, who is 'not just a coffee' [as she is described in her recent TV commercial for coffee] also hopped aboard. SBS TV series "My Girlfriend Is Gumiho", which premieres August 11 at 9:55 p.m. as the follow-up Wednesday/Thursday evening drama to "Bad Man", is neither a historical epic nor a blockbuster drama with a production budget of over 10 billion won. Boot it is already stirring up heated attention with the union of the abovementioned people. At the show's press conference held August 4 at SBS headquarters in Seoul's Mok-dong district, director Boo Seong-cheol described "My Girlfriend Is Gumiho" as "a drama that is like a total gift set which has everything -- laughter, tears and sad melodrama". Lee Seung-gi, who plays the lead role of Cha Dae-woong, remarked, "A lot of people are talking about the importance of the one-top and personal ability, but I think teamwork is the most important thing. While I was watching the World Cup this year, I realized that what surpasses fancy individual skill is excellent teamwork". If so, then under the possibility that 1+1+1 does not always end up as 3 but can drop to 0 or add up to 10, what should we expect, or worry about, the combination of Lee Seung-gi, Shin Min-a and the Hong Sisters, who are the real stars of "My Girlfriend Is Gumiho"?

1. The Hong Sisters: The same old story VS a drama as unpredictable as a rugby ball

Scenes from dramas written by the Hong Sisters: "Fantastic Couple" (left) and "You're Beautiful"

The sister duo of Hong Jeong-eun and Hong Mi-ran, who made their debut with the 2005 KBS TV series "Sassy Girl, Chun-hyang", scored consecutive hits with SBS' "My Girl" and MBC's "Fantastic Couple" to join the ranks of writers who guarantee commercial success. KBS' "Hong Gil Dong", which attempted at a new genre by fusing comedy with traditional Korean drama, and SBS' "You're Beautiful", a teen romance drama which maximized the fantasy of idol fandom, were not as commercially successful as their previous works but created a mania fan base and caused a stir, particularly on the web. The sisters' talents are creating unique female leads one has never seen before and new type of characters -- such as a con man who cons for a living, an arrogant and rude conglomerate, and a girl disguising as a man who is so innocent that she is almost a nuisance to people. They are also excellent in their ability to mix just the right amount of sensational comedy, as they were originally writers on a variety show, and elements of romance which get infinitely heartbreaking into the second half of a drama.

"My Girlfriend Is Gumiho" is about an immature rich boy, who lost his parents at a young age and was raised by his grandmother and aunt, accidentally releasing Gumiho from a scroll painting that is several hundred years old and eventually falling in love with her while spending time with her in a rooftop house. The story came from the lively imagination that is a characteristic unique of the Hong Sisters. The dialogue between Cha Dae-woong (played by Lee Seung-gi) and Gumiho (played by Shin Min-a) -- best represented by the lines "No cow (beef) today" and "Shut up, before I eat you up!" -- clearly displays the ironic situation of the male lead being frightened of his 'frighteningly pretty' girlfriend. The character Eun Hae-in (played by Park Soo-jin), the first love of Cha Dae-woong who is "hateful and like a human fox", looks to faithfully fulfill the sub-female lead role who will persistently interfere with the two leads, just like the characters Oh Yu-kyung (played by Park Han-byul) in "Fantastic Couple" or Kim Se-hyun (played by Park Si-yeon) in "My Girl". Actor Byun Hee-bong, who was cast as Seol Gong-cha n(played by Lee Dong-wook)'s strict grandfather in a conglomerate family in "My Girl", appears in "My Girlfriend Is Gumiho" as a wealthy grandfather with a lot of real estate who wants to raise Cha Dae-woong strictly.

The middle-aged romance that well served an indispensable role in "My Girl" and "Fantastic Couple" will also be played out in "My Girlfriend Is Gumiho" through the characters Ban Doo-hong (played by Sung Dong-il), who dreams of being the "middle-aged Chow Yun-fat", and Cha Dae-woong's girl-like aunt Cha Min-sook (played by Yoon Yoo-sun). If "Sassy Girl, Chun-hyang" had the couple who were friends with the main characters, then in "My Girlfriend Is Gumiho", Dae-woong's friends Kim Byung-soo (played by Kim Ho-chang) and Ban Seon-nyeo (played by Hyomin) suggest a sub-plot in the story. This indicates that the sisters will play out the best kind of story that they can and tell in the most effective way but, at the same time, it will also bring a certain amount of deja vu to viewers who have been watching their dramas over the years. Hong Mi-ran has said that she wishes "other people would enjoy watching what we find entertaining rather than [us] obsessing about showing viewers that we are improving" while Hong Jeong-eun remarked that she wants to "write a drama that is, like a rugby ball, unpredictable in where it will bounce to next". How will their new series "My Girlfriend Is Gumiho" turn out? 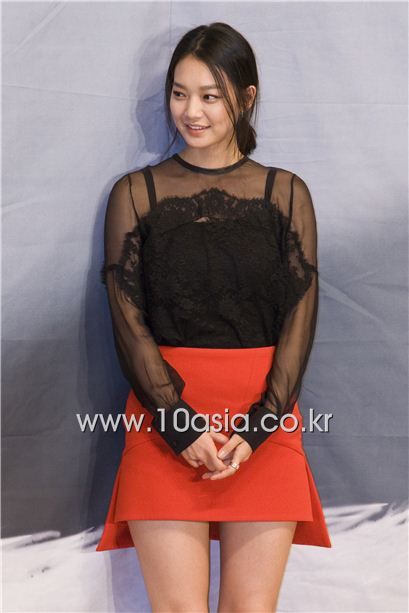 Actress Shin Min-a poses during a photo session of a press conference for upcoming SBS TV series "My Girlfriend Is Gumiho" held at SBS' headquarters in Seoul's Mok-dong district of Seoul, South Korea on August 4, 2010.

"[PREVIEW] SBS TV series "My Girlfriend Is Gumiho" (1) "
by HanCinema is licensed under a Creative Commons Attribution-Share Alike 3.0 Unported License.
Based on a work from this source