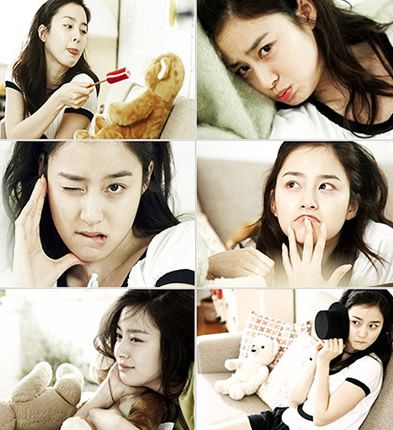 Actress Kim Tae-hee has become the talk of the town with a commercial in which she appears with no make-up. The commercial for Olympus Korea emphasizes Kim's natural side. Sporting a mane of untidy hair as if she just woke up, she curls her lips, plays with a teddy bear, frowns, and sucks a lollipop.

The commercial has received a strong response because it shows another side of the actress, who has used the fact that she is intelligent and refined as a graduate of the prestigious Seoul National University to appeal to the public.


The second part of the commercial aired recently following the first segment which debuted early last month. Internet users responded favorably, saying it's good to see the "ordinary side" of the normally more polished actress. "The commercial makes Kim look like one of the people around us. I suddenly came to like her", a user wrote.

With the positive response, it's no surprise that the commercial took the top spot in the electric and electronics category of the TV commercial popularity rankings only 10 days after the first episode aired.

An industry source said that with interest in the second episode also exploding soon after its release, the company is considering creating two more commercials in the same series.