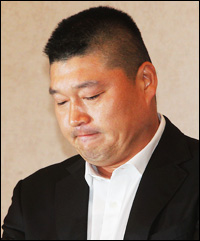 Fans and TV producers alike are on alert about how funnyman Kang Ho-dong's "tentative retirement" will affect the local entertainment scene, as his absence strikes a blow to several of Korea's most watched shows.

Kang, one of Korea's most high-profile MCs, called it quits Friday after it became public on Sept. 4 that he allegedly failed to pay taxes amounting to an estimated hundreds of millions of won. He announced plans to tentatively retire at a press conference in Seoul.

"I am an entertainer. It is my duty to provide laughter and joy to viewers through the TV screen but given my situation, how could I impudently show my face onscreen and joke and laugh", he told reporters after repeatedly apologizing for letting down fans.

Diverging branches of online communities supporting or denouncing the star have mushroomed, while one civilian went as far as reporting Kang to local authorizes on charges of tax fraud.

Kang said he had been cooperating with legal and tax authorities for the past five months and promised to pay in full his tax debt. He left without answering questions about the details of his stepping down from entertainment.

The 41-year-old former "ssireum" (Korean wrestling) champion is a household name as the host of iconic variety shows on all three networks KBS, MBC and SBS.

The latest viewing figures for a show starring Kang marked a slight decline.

Ratings for Sunday's "1 Night, 2 Days" (KBS 2) were 20.7 percent, almost 4 percentage points down from the previous week, according to AGB Nielsen Media Research. The most recent episode of the reality program featuring Kang was pre-recorded. Ratings for the show "Happy Sunday", of which "1 Night, 2 Days" is a part, also fell to 15.9 percent, 3 percentage points less than the previous episode.

Na Young-seok, producer of "1 Night, 2 Days", said he was unable to dissuade Kang from leaving the program, which is due to air until February next year. He added that the remaining five members will continue to appear and that there are no plans to replace Kang.

"Kang Ho-dong is a very responsible person. I did sense that he was contemplating the prospect of retiring but I was unable to persuade him otherwise", Na was quoted as telling Yonhap News Sept. 9. He added that he was notified by Kang of the decision and that the MC wishes to bid viewers a proper goodbye through the show.

The makers of the program are discussing details of recording the farewell episode in two weeks' time.

Meanwhile, the other programs featuring Kang are under fire.

MBC's "Golden Fish-Mureuppak Guru", a talk show hosted by Kang since 2007, is seeking alternatives but has yet to make any final decisions. Unlike "1 Night, 2 Days", the program had no plans to end its run.

Park Jeong-gyu, producer of the show, said the makers are seeking countermeasures by looking at the bigger picture. "It is no easy decision to find a new MC or to discontinue the program. Nothing has been decided".

The next three episodes of the weekly Wednesday show have already been recorded, and some of the shows may be aired in two parts, said the makers.