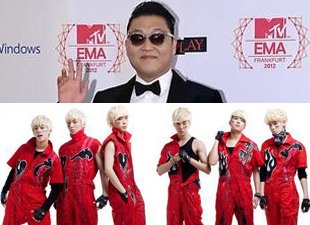 K-Pop has made it onto the website of arguably the biggest musical honour in the industry.

The now internationally-recognized PSY along with idol group B.A.P.
were included in a section titled "Snapshot: Best of 2012" on the official website for the Grammy's.

The montage was a collection of the most photographic moments captured in a stillshot taken from the past year. In addition to pictures of PSY and B.A.P. were photos of Beyonce, Justin Bieber, Jay Z, Rihanna, Lady Gaga, Mariah Carey, and more.

The two Korean musical acts were the only Asian acts included in the photos.