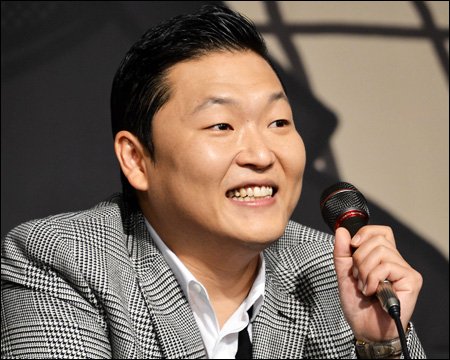 Rapper/singer Psy smiles broadly as he speaks at a press conference held at the Ramada Hotel in Gangnam, southern Seoul, after returning from the United States. / Korea Times photo by Shim Hyun-chul 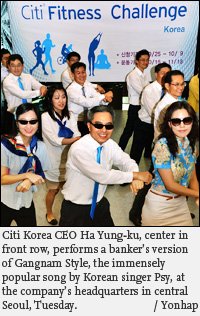 Now a world star, rapper/singer Psy said that he will do the horse-ride dance topless if "Gangnam Style" should top the U.S. Billboard chart.

"I will find a place that will hold as many people as possible and take my top off and dance the horse-riding dance", said the singer of the moment Tuesday, making reporters laugh at a press conference held at the Ramada Hotel in Yeoksam-dong, southern Seoul.

The 34-year-old rapper/singer returned to a hero's welcome in Korea after successfully breaking into the American music market. The star, whose real name is Park Jae-sang, said that he is still amazed at his success; but he was only human.

"I initially cried and drank to celebrate when the song first climbed to 64 on the chart, but now that it's at 11, I have to admit I am anticipating", he said.

Psy, who recently signed a contract with Justin Bieber's management company, Island Records, said that he plans to release a single or a studio album in the U.S. by mid November. The U.S. record label is owned by Universal Music Group and represents world-renowned stars including Mariah Carey, Snow Petrol and Jennifer Lopez.

"Universal wants to release at least a single this November and I will record a few songs in Korean too. I think I will remake some of my past songs. But I plan to record my second single in English", he said.

"I think I am finally in my golden days 12 years into my career as a singer", he added.

He noted that he might also be performing at Madison Square Garden in New York, but nothing has yet been determined.

The artist, who has become a sensation around the world, returned after appearing in music festival held by the United State's biggest radio station, iHeart Radio, Sunday. His song has topped the iTunes Chart in 34 countries including the United Kingdom, the United States, Belgium, the Netherlands, Poland, Argentina and Brazil. It also broke a Guinness World Record to become the "most-liked" video on YouTube of all time.

Psy said the two questions that he was most asked in the U.S. were: Where is "Gangnam?" and "How do I do the invisible horse-riding dance?"

Asked why his song has become so popular around the world, he said it was the "fun" factor that fueled has the worldwide Psy fervor.

"Everything I tried was fun. That's all. There is no philosophy or anything. It's just a funny song. The record company and other people in the U.S told me that this song has become popular because it's not serious. I know it sounds funny that I became famous not because of my singing ability but because it's fun", Psy said.

Park said he hopes to see that someday Korean artists become more respected and well-known around the world.

"It's is just my wish that I hope to become known for my abilities, not just as a random Korean guy who does some funny horse-riding dance moves", he added. "I would like to hear someday that Korean artists know how to enjoy and have fun at their concerts while giving their best performances".

"And as my spirit of fun by music indicates, I aim to give people great enjoyment and amusement".