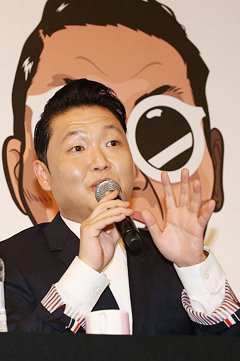 Psy talks at a press event promoting his new album in Seoul on Monday.

The pressures of fame and the super hit "Gangnam Style" have taken their toll on rapper Psy, he told reporters Monday.

"There were times when I used to write songs easily, but after 'Gangnam Style' I felt immense pressure from thoughts like, 'This song will not be as successful' and 'Non-Koreans won't be able to understand if I write like this.' That made it difficult for me to write songs", he said.

But now he is back with his seventh album, three years and five months after the last one.

In the end he reminded himself of his roots. "I became a singer because that's what I wanted to do, without worrying about whether people will love this. Without these worries, I was able to do my best in making fun music that will get people dancing. I did everything I wanted to do with a beginner's mind on this album".

The two title tracks are "Bell Bottoms" and "Daddy". "Bell Bottoms" is a retro dance song with rhythms from the 1970s and the 1980s. "Daddy" is a faster-paced song.

He said "Bell Bottoms" is probably for the domestic market and "Daddy" for the overseas market because it has more lines in English.

But Psy claims he is not even thinking about topping the Billboard charts and will focus on the Korean stage. But if he is unexpectedly pushed into the overseas charts again, he will seize the opportunity.

The new album has nine tracks, and the music video and songs were released at midnight on Monday. Psy will perform the new songs at the 2015 Mnet Asian Music Awards in Hong Kong on Wednesday.

"Psy Overcomes Creative Block with New Album"
by HanCinema is licensed under a Creative Commons Attribution-Share Alike 3.0 Unported License.
Based on a work from this source