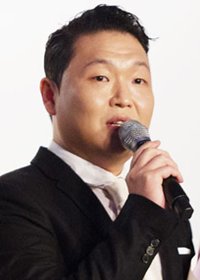 Rapper Psy received an award for promoting Korea from the Corea Image Communication Institute on Tuesday.

The institute, a private organization that works to improve Korea's global image, annually gives awards to people who have helped improve Korea's image around the world.

After the global megahit "Gangnam Style" in 2012 and follow-up singles such as "Gentleman" and "Hangover", Psy released his latest album "Daddy" which has garnered nearly 100 million clicks on YouTube since its release in early December last year.