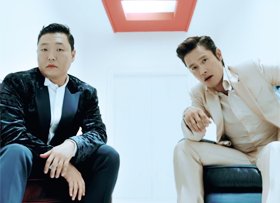 The music videos for the album's two lead tracks have been viewed more than 5 million times each on YouTube.

Less than a day after the release, "I Luv It" and "New Face" received 5.5 million and 5.1 million views on the video sharing site.

"He returns with new easy-to-learn moves that look like an updated version of the 'Gangnam Style' dance", Billboard said.

"Psy's New Music Videos Hit 10 Million YouTube Views in a Day"
by HanCinema is licensed under a Creative Commons Attribution-Share Alike 3.0 Unported License.
Based on a work from this source