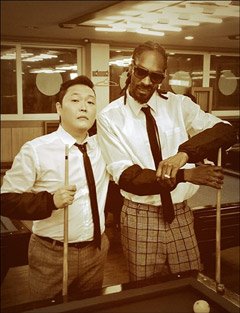 Psy will perform his new song on an American talk show this weekend.

According to his agency YG Entertainment, the rapper will appear along with Snoop Dogg on Jimmy Kimmel Live: Game Night and unveil his new song "Hangover" on Sunday.

The song is expected to draw considerable attention as the primetime show is due to be broadcast right after the NBA finals.

The new song is a hip-hop track, making it a different beast from his previous songs "Gangnam Style" and "Gentleman", the agency said.