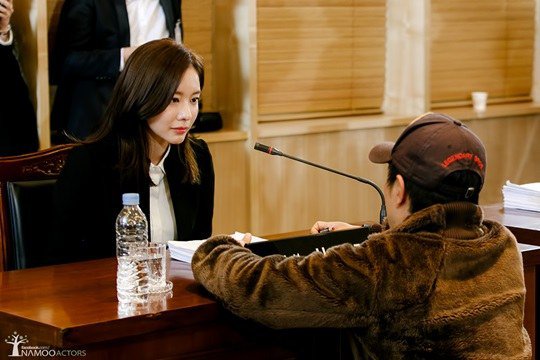 Kim Ah-joong is currently in midst of production for "Punch - Drama".

Pictures of Kim Ah-joong show her concentrating on her script. She's also in serious discussion with director Lee Myeong-woo.

Kim Ah-joong plays the role of investigator Sin Ha-kyeong in the new SBS drama "Punch - Drama". She's righteous and upright and still has feelings for her ex-husband Park Jeong-hwan (Kim Rae-won) who is also an investigator.

Kim Ah-joong is working hard on her character. She only concentrates on her script and analyzes her character with the director at every chance she gets.

"Punch - Drama" is known to be the newest work by writer Park Kyeong-soo, who also wrote "Empire of Gold". Also, Kim Ah-joong is coming back with a drama for the first time in 3 years.

Her management said, "We can't say for sure not but there's cohesiveness in the character of Sin Ha-kyeong and Kim Ah-joong is making sure she gets the message to the viewers".

"Punch - Drama" will be broadcasted on the 15th of December.

""Punch - Drama", Kim Ah-joong's first drama in 3 years"
by HanCinema is licensed under a Creative Commons Attribution-Share Alike 3.0 Unported License.
Based on a work from this source