Queen of Cannes' Is Back With Lighter Fare 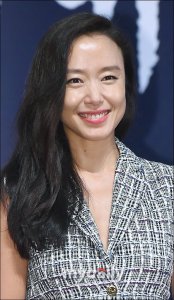 The Queen of Cannes is back. Jeon Do-yeon seemed somewhat overwhelmed by the title, given to her after her winning the Best Actress award at the Cannes Film Festival in 2007 for her role in "Secret Sunshine", but she knew she would have to get used to it. The Chosun Ilbo met her for an interview at a café in Apgujeong-dong on Friday afternoon. "This won't go away until someone else gets the Best Actress award, right? I want to break people's preconception that I peaked at 'Secret Sunshine'", she says.

Jeon is back on the screen with "My Dear Enemy" directed by Lee Yoon-ki, which is to be released this Thursday. She stars as Hee-soo, an unmarried woman who goes to her ex-boyfriend a year after their breakup to collect W3.5 million (US$1=W1,137) that she had lent him. It is a much lighter, and perhaps duller, character compared to the dramatic Shin-ae in "Secret Sunshine", a mother whose child was abducted and found dead. "Because the role of Shin-ae was so difficult, I wanted to do something more relaxing and comfortable after 'Secret Sunshine'. But it wasn't as easy as I thought", Jeon says.

She calls "My Dear Enemy" a romantic film that is different from the average melodrama, where everyone knows how it will end. "I was drawn to Hee-soo because she and I have a lot in common", Jeon says. "She looks as if she often tends to step out of line, but in fact she battles every day to survive".

Jeon is expecting a baby in January next year, and she seems excited. "I thought a mother is a perfect and impeccable being to everyone, but after I got pregnant, I realized that I wasn't ready to be a perfect person for anyone", she admits. But she soon brightens. "I heard daughters are the capital of a family, and it is also fun to see sons growing into young men".

There is more good news for Jeon fans. From Thursday last week until Oct.1, a retrospective devoted to her is being held in the Gwanghwamun and Apgujeong branches of the Sponge House. It's a small film festival consisting of Jeon's entire filmography of 10 films, such as "The Contact" (1997), "Happy End" (1999), "Untold Scandal" (2003), "You are my Sunshine" (2005) and "Secret Sunshine" (2007).

A film festival homage to a 30-something active actress is an extremely rare thing. "At first, I consented to the idea without giving it much thought. I just said yes out of curiosity and for the fun it might bring. But afterwards, I felt a lot of pressure", Jeon says. "But these films are like my children, and they compare quite well with any other films. So while I feel the pressure, I also feel confident and proud".