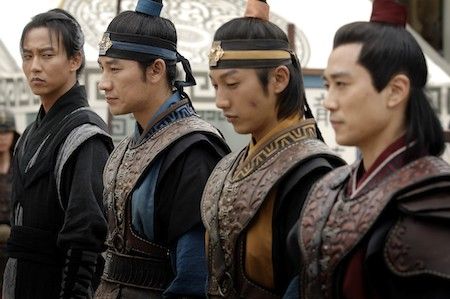 "I hope everyone takes care not to get hurt". (director Park Hong-gyoon)

"I was so focused that now my entire body aches". (Uhm Tae-woong as Kim Yushin)

In an official competition to choose the next leader of the Hwarang, the Poongweolju, the participants now face the third and final test: the partial arts tournament.

The martial arts leg of the competition is the highlight of the entire affair, and it is a chance for the Hwarang to show off their polished fighting skills.

The tournament starts off with 32 competitors, all representatives of the different Hwarang factions. The final four finally boils down to Yushin, Bojong, Alcheon and the wild card Bidam.

Like gladiators, they fought their way to being the final four.

They're parched and covered in dirt after having rolled around in it, but in order to film that perfect scene they give both the rehearsals and the real filming their all. They are all professionals; their torn hands, scratches, skinned knees and aching shoulders are proof of their hard work.

Uhm Tae-woong commented with a smile, "With the mindset that I've gone back to that time period, I found myself swinging even harder".

Lee Seung-hyo (Alcheon) said, "I feel like I'm a character in 'Gladiator'. "

Baek Do-bin (Bojong) said, "Our characters all really want this for different reasons, so even us actors fought like it was real".

Kim Nam-gil (Bidam) jokingly complained, "The scene where I was nearly burned at the stake was nothing compared to this. This scene is twice as hard".

The viewers can't help but anticipate who will come out on top.

"[Queen Seondeok] Finalists of the martial arts tournament, Yushin-Alcheon-Bojong-Bidam"
by HanCinema is licensed under a Creative Commons Attribution-Share Alike 3.0 Unported License.
Based on a work from this source