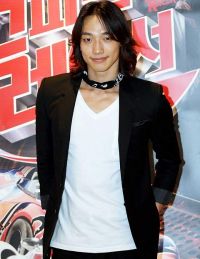 Actor and singer Rain was asked for an interview with the weekly U.S. journal "TIME", according to J. Tune Entertainment.

Every year, "TIME" magazine presents a select list of "100 of the World's Most Influential People" and currently, Rain has surpassed Britney Spears on the online voting site, "2008 Time 100". The request for an interview comes from the "TIME" video web coverage segment, "10 Questions".

This is the third consecutive year that Rain has been linked to "TIME". The Hallyu star was chosen for the "TIME 100" list in 2006 and walked the red carpet with powerful figures such as U.S. Secretary of State Condoleezza Rice and movie mogul Jerry Bruckheimer.

In 2007, he was ranked number one on the online voting system set up for the "TIME 100" and introduced to "TIME" readers as "Asia's Prince of Pop". Once again he is ranked first on the online poll this year along with an interview that can be viewed by a global audience.

The "TIME" editor-in-chief will select ten questions from the countless number sent in to the website (http://www.time.com/10questions) by netizens all over the world.