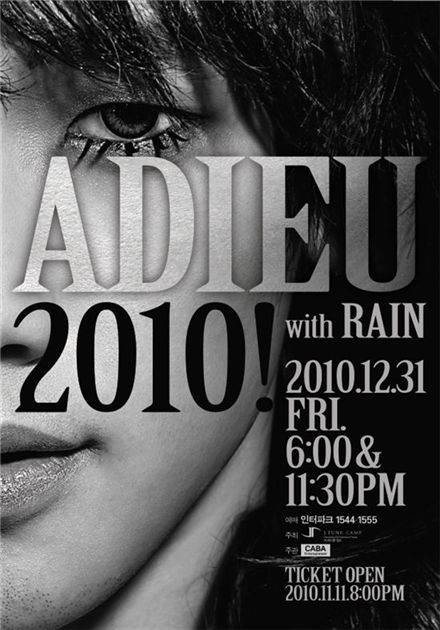 Asian pop star Rain will hold a solo concert in Korea at the end of next month.

A press release from his agency J.Tune Entertainment announced Thursday that Rain will take the stage of Jamsil Indoor Stadium for his concert titled "ADIEU 2010 with Rain" to be held on December 30.

He will be performing his hit songs from the past eight years of his singing career as well as hold several different events for his fans.

Tickets for his concert will go on sale tonight on online reservation site Interpark (www.interpark.co.kr).

Born Jung Ji-hoon, Rain rose to stardom in Korea and throughout Asia with his solo singing career which kicked off in 2002. He also expanded his career into acting, appearing on the small screen for TV dramas "Sang Doo! Let's go to school" and "Full House".

In 2008, he made his Hollywood debut through the Wachowski Brothers' action pic "Speed Racer" and landed the lead role in the martial arts film "Ninja Assassin" last year.

He is currently playing the role of Gee-woo in SBS' Wednesday and Thursday night series "The Fugitive Plan B" alongside actress Lee Na-young and Daniel Henney.

"Rain to hold solo concert in Korea at the end of Dec "
by HanCinema is licensed under a Creative Commons Attribution-Share Alike 3.0 Unported License.
Based on a work from this source