Rain Under Fire for Bunking Off Military Duties 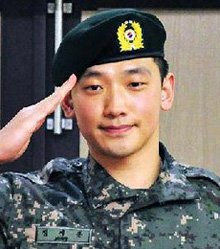 Singer and actor Rain, who is serving his mandatory military service, has provoked controversy over the privileges enjoyed by star conscripts by taking unusually frequent holidays. The star attracted the latest unwelcome publicity after it was reported that he is dating actress Kim Tae-hee.

Rain began his service in October 2011 as an assistant instructor at a boot camp on the front line but was transferred to Seoul in March last year to serve in the Army's entertainment corps.

According to the Defense Ministry, Rain got 17 days off as a reward and took another 10 overnight vacation days since March. He spent another 44 days outside his military base on official business such as morale-boosting performances, recording sessions and dance practice for military events. In July, Rain spent four days at one studio in Gangnam.

That makes 71 days off since he was stationed at the entertainment corps. Adding the holidays he got while serving on the frontline, Rain had 94 days off base, or one-fifth of his 450 days of service so far.

That is more than twice the number of average holidays enjoyed by other troops from 2009 to 2012, and that is even before he has used the 28 days of regular holidays to which he is entitled.

The star also apparently left base frequently during the day, claiming he needed to practice for military events but returned by nightfall. The military says it has no record of such absences. "An entertainment troop member is required to be accompanied by a Defense Ministry staffer when leaving the base for official purposes", said a ministry spokesman. "But it is not possible to accompany them 24 hours a day, so conscripts often return to base alone".

This has led to mounting suspicion that Rain made up excuses to leave the base and see Kim.

Photos also show Rain outside base in uniform but without his military cap, which is a violation of Army regulations. The ministry pledged to investigate and take necessary action. It has now also launched a probe into holidays taken by 15 other entertainers currently serving with the corps.

The military has been relatively lax about allowing entertainment troops to leave the base even overnight due to a lack of facilities for them to practice.

This is not the first time this issue has surfaced. Singer Park Hyo-shin, who completed his service in September last year, received 74 days off and spent another 67 days off base overnight citing official duties.

Actor Lee Dong-gun, who completed his service in March 2012, got 90 days off plus another 27 days overnight on official duties.

According to Democratic United Party lawmaker Jin Sung-joon, the 32 conscripts in the entertainment corps who were discharged from November 2009 until September last year received an average 75 days off, 1.7 times more than other troops.

The ministry website and Internet portals have been flooded with comments criticizing the system. One woman sent a tweet to Defense Minister Kim Kwan-jin saying, "It makes no sense that I rarely get to see my boyfriend, who is serving his mandatory military service, but Kim Tae-hee gets to see her boyfriend all the time".

Rain's management company told reporters that he received no special privileges and would accept punishment for violating dress code regulations. A ministry spokesman said Rain has temporarily halted his duties and is "reflecting on his actions".