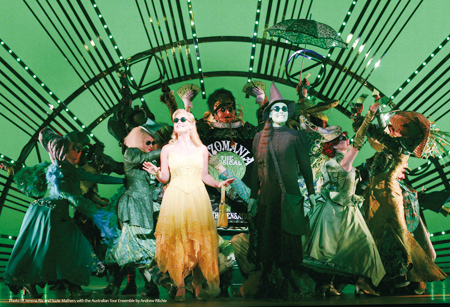 (Above picture:A scene from the Broadway hit "Wicked", which will come to Korea in May / Courtesy of Andrew Ritchie)

The year 2012 is going to be full of musical joy as a long list of touring, licensed and homegrown musical productions - from the longest-running musical in the world to a theater version of Korean wave drama - wait to be staged.

One of the musicals receiving the highest expectations for 2012 is "Wicked", which will come to Blue Square in Hannam-dong from May to October. The Broadway extravaganza explores what happened before Dorothy entered the Land of Oz and the relationships between the Wicked Witch of the West, Glinda the Good and the Wizard of Oz. Theatergoers will be greeted by a giant dragon and clockwork mechanics above and around the proscenium, a green-skinned witch and a bubbly blonde witch as well as whimsical costumes in presenting the emerald city of Oz. The Australian tour will come to Korea after stopping at Singapore.

An English production of the sung-through French-Canadian musical "Notre Dame de Paris" will come to the Sejong Center for the Performing Arts from Jan. 19 to Feb. 26. It is composed of some 50 numbers weaving the love story of gypsy girl Esmeralda and three men - the hunchback Quasimodo, archdeacon Frollo and Captain Phoebus.

In December, Andrew Lloyd Webber's timeless classic "The Phantom of the Opera" will visit Korea again after a seven year absence. 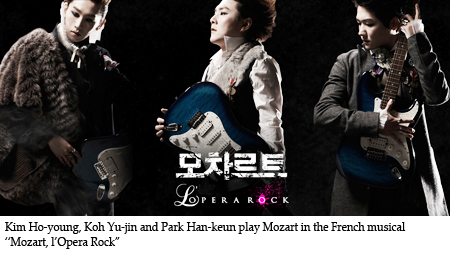 In January, "Doctor Zhivago" will kick off the fierce competition among premieres of licensed productions. Featuring model-turned-actor Ju Ji-hoon and musical actor Hong Kwang-ho as the Russian poet-doctor, it will portray a dynamic love story during the Russian Revolution of 1917 and the subsequent Russian Civil War.

French musical "Mozart, l'Opera Rock" will be staged in Korean in February. The French version will focus on the conflict between Mozart and his rival Antonio Salieri. It combines Mozart's classical pieces such as Symphony No. 40 and Piano Concerto No. 23 with modern rock music. The production will begin at the Keimyung Arts Center in Daegu and then move to the Seongnam Arts Center in Seongnam, Gyeonggi Province, in March.

M Musical Company will stage "Catch Me If You Can", which raised its curtain on Broadway in 2011 based on the movie of the same name, from March to June at the Samsung Card Hall of Blue Square. "La Cage aux Folles", better known for the 1996 film "The Birdcage" in Korea, will hit the stage of LG Arts Center from July to September. The musical revolves around a gay couple and their conservative family and events when the two men try to get married. Celebrating the 200th birthday of Charles Dickens, a musical version of "A Tale of Two Cities" will be staged from August to October at Chungmu Art Hall.

A licensed production "Les Miserables", the longest-running musical in the world, will finally come to Korea in November. KCMI, the Korean production company involved said they are currently holding auditions for the show and the local rendition will begin in Daegu before heading to Seoul and other parts of the nation. The Korean version will be based on the 25th anniversary production of the musical staged in London in 2010. 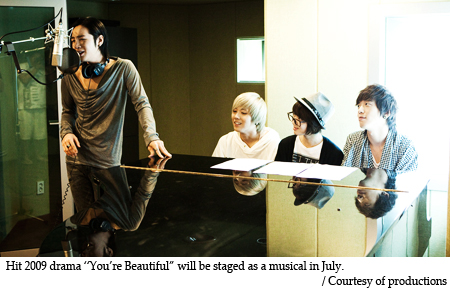 From screen to stage

Converting hit television dramas into musicals will be a continuing trend in 2012.

"Lovers", a hit 2004 drama starring Park Shin-yang and Kim Jung-eun, is scheduled to be presented in April. The drama is reborn as a show musical on a set portraying alleys of Paris and Seoul with composer Joy Son's cheerful music. The outline is a common romantic comedy, in which a plucky woman falls in love with a cold-hearted wealthy man, but the story is told in a playful way with tight choreography.

Dramas "You're Beautiful" and "The Princess' Man" will also be transformed. The 2009 "You're Beautiful" is about a girl pretending to be a boy in a band who receives much love from the members and was a big hit both in Korea and Japan. The curtain will be raised on July 31 at the M Theater of the Sejong Center for the Performing Arts.

Seoul Metropolitan Musical Theatre will stage "The Princess' Man", a fictional epic drama portraying love between the daughter and son of political opponents Prince Suyang and Kim Jong-seo in the early Joseon era (1392-1910) at Sejong Center for the Performing Arts in May. More details will be announced later.