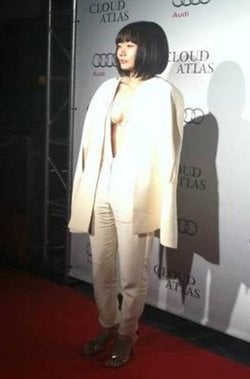 "Cloud Atlas", in which Korean actress Bae Doona recently made her Hollywood debut, has been receiving rave reviews. It premiered at the 37th Toronto International Film Festival on Saturday and has been praised by critics and fans alike.

The movie was co-directed by the Wachowskis brothers, the brains behind "The Matrix" trilogy, and Tom Tykwer of "Perfume: The Story of a Murderer" fame.

It features six interwoven stories that take place over a span of 500 years starting from the 19th century.

Warner Brothers will release "Cloud Atlas" at U.S. theaters on Oct. 26. The movie will hit Korean screens on Jan. 10.