Reality TV gets a spin as stars challenge skating, dancing 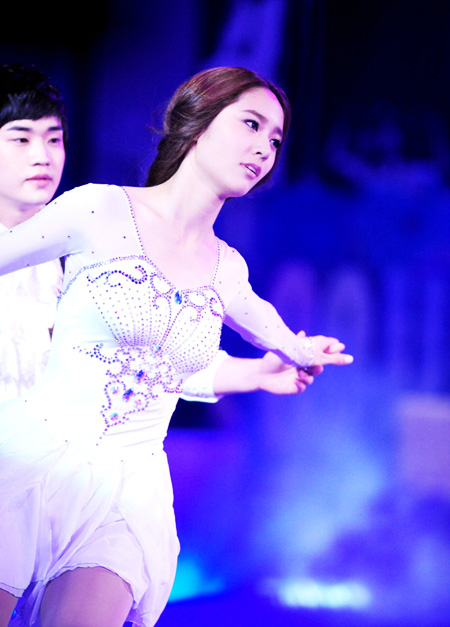 Stars are being kept busy. They have to prove their singing ability on MBC's "I Am a Singer" and hone their vocal skills on tvN's "Operastar 2011". Now, two new shows bring celebrities into the professional fields of skating and dance.

Riding the popularity of figure skating queen Kim Yu-na, SBS started airing "Kiss and Cry" on May 22, bringing singers and actors to the ice rink. The broadcaster created a small skating rink at its production center in Goyang, Gyeonggi Province, to shoot the show.

On Sunday's episode, the stars engaged in practice with professional skaters. Yunho combined his dance skills with skating and tried to adapt to the new situation with help from his partner Claudia Muller. The couple danced to "Summer Nights" from the musical "Grease", but Yunho tripped on the ice due to a lack of practice and was criticized for not protecting his partner.

Krystal of f(x) was paired with figure skater Lee Dong-whun and performed a romance-inspired routine to "Romeo and Juliet". She showed off her athletic ability by performing movements such as lying on the knees of her partner. 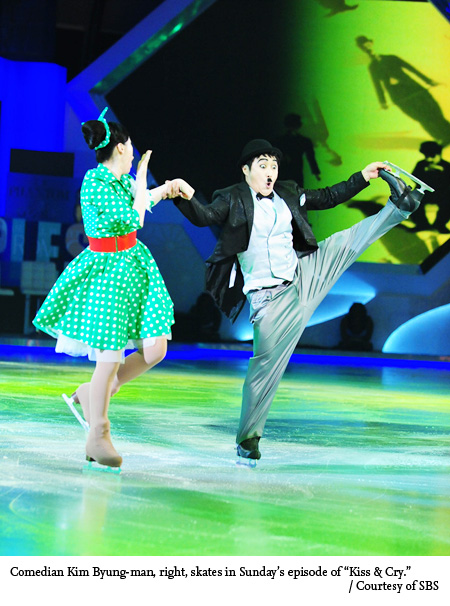 Speed skater Lee Kyu-hyuk became "The Phantom of the Opera" on the ice, hiding half his face behind a mask.

The program is receiving good reviews from audience as they can see stars practicing a new skill. Beautiful choreography and costumes add glamour to the show.

Kim Yu-na has applauded the effort of the celebrities.

The first pair to be eliminated will be announced this week and the winner of the final competition will perform in Kim Yu-na's ice show in August. 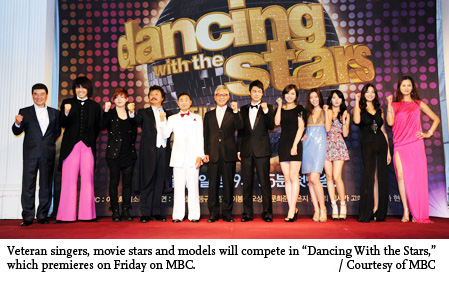 The dance boom that was ignited in Great Britain and hit the United States has now arrived in Korea. MBC will air the Korean version of "Dancing with the Stars" from Friday, featuring celebrities from diverse fields, from a marathon runner to a weatherwoman and a girl group member.

Successful overseas, the show is highly anticipated in Korea. As dance competitions are not very popular here, the program will blend in more familiar genres such as hip-hop, the producer of the local version said.

Veteran actor Lee Deok-hwa and model Lee So-ra are to host the Korean spinoff of the celebrity dance show.

"I was advised not to exert influence on the evaluation by viewers since half of the judging comes from them", Lee said at a press conference for the show, last Friday.

The 11 couples will learn the same genre of dance and compete each week. The winning team will receive two Volkswagen vehicles and prize money of around 100 million won.

Though they said practicing for the show was hard, the candidates seemed excited about learning something new.

Renowned vocalist Kim Dong-gyu said he feels as if there is nowhere else for him to go.

"This is my first press conference and I have never stood in front of so many cameras. I think I will feel similar when I go on stage to dance", Kim said. "I have been on stage numerous times, but to sing, not to dance. I want the audience to get closer to dance competitions, an art of the moment".

Lee Bong-joo thinks he was selected to compete because he is the worst dancer among athletes. "But it is a challenge for me and I think I could be a model for other sportsmen", he said.

Jessica Gomes, an Australian model, is the only expatriate participant in the show. She said she watched the show in Australia and the U.S.

"I was excited to be invited to the first Korean production of 'Dancing with the Stars'," she said. "I love dancing and am spending more time in Korea, hopefully learning more Korean here".

Even members of former and current dance groups expressed difficulties in competitive dancing. Moon said he quit dancing some 10 years ago. "I thought it would be fun and accepted the offer. However, I almost regretted the decision since dancing and dance competitions are totally different", he said.

Hyun-a also said she likes to dance but it is a new genre and difficult for her.

"Reality TV gets a spin as stars challenge skating, dancing"
by HanCinema is licensed under a Creative Commons Attribution-Share Alike 3.0 Unported License.
Based on a work from this source