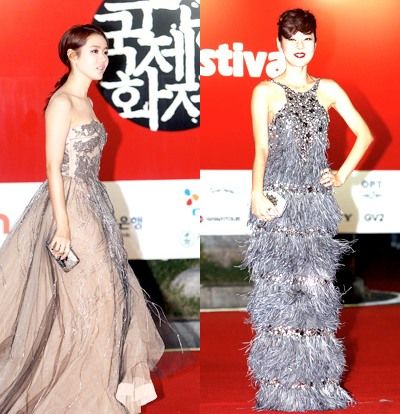 BUSAN ― The hours leading to the long-awaited opening of the 15th Pusan (Busan) International Film Festival (PIFF) Thursday night saw traffic slow to a crawl along Haeundae Beach and huge crowds jostle along the sidewalk. Empty cabs along the road to the ceremony refused fares looking to sit, rather than walk to the venue.

As the celebrities and cinema big names made their way into the crowd on the extravagant path of scarlet at the Suyoung Bay Yacht Marina, the fans screamed their ooh's and aah's and pushed forth into the mass in an attempt to see the more than 40 stars from abroad and 125 domestic ones.

Also joining the ceremonies was the culture minister Yu In-chon, seen shaking hands with audience members and escorted by veteran actor Ahn Sung-ki. Cho Yoon-sun of the ruling Grand National Party graced the red carpet, along with several members of the political group, settling in the center of the seats in the outdoor theater for the night's screening.

The starlet of this year's retrospective, Kim Ji-mee, arrived wrapped in a dress of golden, flowing fabric, covered with a glittering white shawl and accompanied by actress Kang Soo-yeon.

Ku Hye-sun, a name made popular by the hit series "Boys over Flowers", sported a black bowler and matching monochromatic outfit, while fellow former-cast member Lee Min-jung also made an appearance.

Jury member for the New Currents section Kim Yunjin (formerly of the hit TV show "Lost") arrived with her hair up, wearing a sparkling dress of jewels and deep ruby lipstick. Japanese costume designer Wada Emi prepared for the cool evening with a long white blazer and, though for a moment Cho Yeo-jeong almost lost her heel, the star gracefully recovered both her stance and footwear. Won Bin drew great cries of excitement, heard extending from the outskirts of the enthused fans.

Closing the red carpet ceremonies were bow-tied festival director Kim Dong-ho and the team of opening film "Under the Hawthorn Tree", director Zhang Yimou in an all-black ensemble, accompanied by leading actors Shawn Dou in a mandarin-collared white shirt and Zhou Dongyu in an extravagant red dress.