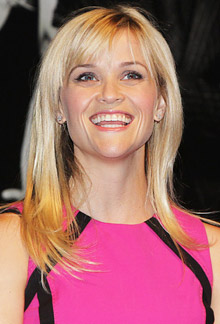 Actress Reese Witherspoon made her first visit to Korea on Thursday ahead of the release of her movie "This Means War" here next week. The film revolves around the story of two CIA agents who fall in love with the same girl and wrestle for her affections.

Witherspoon, who has been hailed as the "queen of the romantic comedy", or the "Meg Ryan of the 2000s", appeared at the press conference in Seoul in a stylish cocktail dress.

She said that, when selecting roles, one of the most important factors for her is who will be directing it. The actress also expressed her hope of having a chance to work with Korean director Bong Joon-ho, who is currently shooting a film in the U.S. She said she also likes Park Chan-wook's films due to his unique style of cinematography.

After her debut as a model at the age of seven, the actress has enjoyed a flourishing screen career with such hits as "Cruel Intentions", "Legally Blonde" and "Vanity Fair".

Witherspoon, who won an Academy Award for Best Actress with "Walk the Line", said she has been able to continue her career as an actress because she loves making films and trying on new on-screen personas.